India   All India  25 Dec 2017  With a glass barrier in front, Jadhav meets wife, mother in Pak
India, All India

With a glass barrier in front, Jadhav meets wife, mother in Pak

The meeting, which took place 21 months after he was arrested in March 2016, lasted for about 40 minutes. 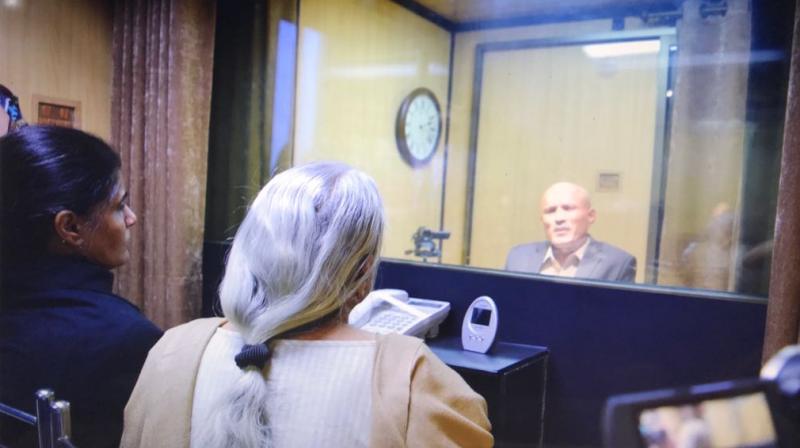 Kulbhushan Jadhav's wife and mother came face to face with Kulbhushan but between them was a barrier of glass screen. (Photo: Twitter | ANI)

Islamabad/New Delhi: Kulbhushan Jadhav, a former officer of the Indian Navy sentenced to death by Pakistan military court for ‘espionage’, came face to face with his mother and wife on Monday, but between them was a barrier of glass screen. The meeting, held after 21 months after his arrest in March 2016, lasted for about 40 minutes.

Pakistan Foreign Minister Khawaja Muhammad Asif on Sunday said that they have granted India consular access to Indian death row prisoner Kulbhushan Jadhav by allowing the presence of an Indian diplomat during the meeting with his family.

As JP Singh was accompanying Kulbhushan's wife and mother for the meeting, it would be considered a "consular access", Asif had told a Pakistani media channel on Sunday. Asked specifically if it constituted consular access as an Indian official would be present in the meeting, Asif said, "Yes".

However, Foreign Office spokesperson Mohammad Faisal on Monday said that India was not given consular access to Jadhav.

Faisal tweeted: "Pakistan permits the meeting of wife and mother of Commander Jadhav with him, as a humanitarian gesture, on the birthday of the Father of the nation, Quaid e Azam Muhammad Ali Jinnah."

Pakistan permits the meeting of wife and mother of Commander Jadhav with him, as a humanitarian gesture, on the birthday of the Father of the nation, Quaid e Azam Muhammad Ali Jinnah.

Faisal also told media that "presence of an official of Indian High Commission in the meeting was not consular access" as he would only see the meeting taking place.

In India, officials downplayed the comments by the Pakistani minister, maintaining that the Indian diplomat was only accompanying Kulbhushan's family and it cannot be construed as "consular access".

Faisal has earlier also said that the decision to allow Jadhav to meet his family was taken on "humanitarian grounds".

They would be immediately travelling back to India via Oman. They will travel to Muscat on Oman Air and then will board Air India flight to New Delhi.

Kulbhushan's family was not allowed to interact with the media.

Stringent security measures were taken and additional police and paramilitary troops deployed around the Ministry of Foreign Affairs in Islamabad.

Kulbhushan Jadhav, 47, was sentenced to death by a Pakistani military court on charges of espionage and terrorism in April, following which India moved the International Court of Justice (ICJ) in May. The ICJ halted his execution on India's appeal pending the final verdict by it.

India, however, maintains that Kulbhushan Jadhav was kidnapped from Iran where he had business interests after retiring from the Indian Navy.