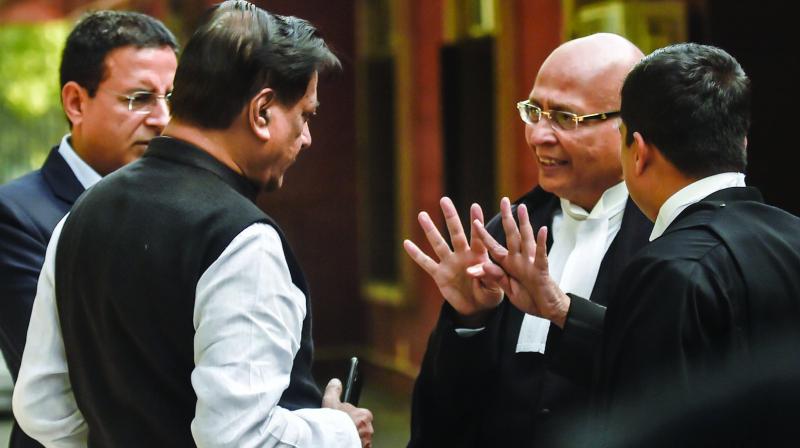 A special bench comprising Justices N.V. Ramana, Ashok Bhushan and Sanjeev Khanna sought the two letters to be placed before the them by 10.30 am on Monday, when the court will hold a further hearing on the petition by the Shiv Sena, Nationalist Congress Party and the Congress seeking a direction for a floor test within 24 hours.

“As adjudication of the issues and also the interim prayers sought by the petitioners to conduct a floor test within 24 hours has to be considered after perusing the order of the governor as well as the letters submitted by Mr Devendra Fadnavis ... we request Mr Tushar Mehta to produce those two letters by tomorrow morning at 10.30 am, when the matter will be taken up, so that the appropriate order will be passed.”

The court asked solicitor-general Tushar Mehta to place before the court the two letters — one by Mr Koshiyari and the other by Mr Fadnavis — as it noted that no lawyer had appeared for the Maharashtra government.

Senior counsel Kapil Sibal, appearing for the Shiv Sena, informed the court that the petitioners had served copies of their petition to all the parties — the Centre, the Maharashtra government, chief minister Devendra Fadnavis and deputy chief minister Ajit Anantrao Pawar.

The court, for the time being, kept in abeyance the prayer seeking a direction to governor Koshiyarti to invite the “Maha Vikas Aghadi”, comprising the Shiv Sena, NCP and Congress, that said it had the support of over 144 MLAs to form the government under the leadership of Uddhav Thackeray. In a House of 288 MLAs, 144 is the halfway mark.

Kapil Sibal, appearing for the Sena, and Abhishek “Manu” Singhvi, appearing for the NCP and Congress, sought a direction for the floor test within 24 hours; while senior counsel Mukul Rohatgi, appearing for a group of BJP and Independent MLAs, urged the court to issue notices and give two to three days to place all the relevant records before the court.

As Mr Rohatgi asserted the governor’s discretion to invite someone to form a government and administer the oath was immune from challenge under Article 361 of the Constitution, Justice Ramana said: “The governor can’t invite anybody and appoint him chief minister... That (appointment) has to be proved on the floor of the House.”

Mr Sibal asked that if Mr Fadnavis claimed majority support at the time of taking the oath, why was BJP now shying away from facing a floor test. Daring Mr Fadnavis to display his majority support on the floor of the House, he said the alliance would demonstrate that a majority of the newly-elected MLAs were with them, Mr Sibal said. “The act of the governor in recommending the revocation of President’s Rule smacks of bias, is malafide and contrary to all norms established by the judgments of the Supreme Court from time to time.”

“If they have majority, let them display it. We can demonstrate a majority on the floor of the Assembly”, Mr Sibal said, throwing the gauntlet at the BJP.

Citing the case of Karnataka in 2018, as well as Goa, Uttarakhand and Jharkhand, senior counsel Abhishek “Manu” Singhvi said that the common thread running through all these cases was the direction for a floor test within 24 hours.

The four ingredients that a governor must take into account before swearing in a person as chief minister is “satisfaction”, “written document of majority support”, signatures of supporting MLAs and their parade involving physical verification of majority support. “Governor Koshiyari did not do any of them,” Mr Singhvi told the court, pointing to the questionable way that the entire thing was executed.