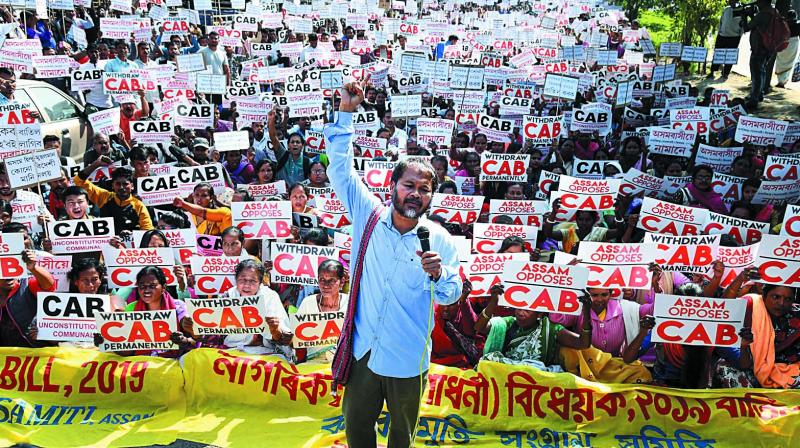 Guwahati: With protests against the Citizenship (Amendment) Bill escalating across the Northeast, a powerful North East Students Organisation delegation has rushed to New Delhi to drum up support in Parliament to block passage of the controversial bill.

Saying the student leaders have reached New Delhi and were seeking appointments with all NDA and non-NDA political parties to lobby against the CAB, NESO chairman Samuel Jyrwa said they had met senior JD(U) leader K.C. Tyagi who assured them the JD(U) would continue to oppose the bill. AASU chief adviser Samujjal Bhattacharyya and its president Dipanka Kumar Nath are also part of the delegation.

Both AASU and NESO are hopeful that the JD(U) can play a key role in bringing together parties opposing the Citizenship Bill to build a united opposition in Parliament. The leaders of these two student groups are likely to reach out to other political parties soon to garner support.

It is significant that the Nitish Kumar-led JD(U) had earlier claimed it was due to its opposition to the Citizenship (Amendment) Bill 2016 that the government was forced not to list the proposed law in the Rajya Sabha earlier this year, even after the bill was passed in the Lok Sabha.

The Citizenship Bill seeks to grant citizenship to non-Muslim immigrants from Bangladesh, Pakistan and Afghanistan, who after religious persecution in their home countries entered India till December 2014.

Expressing deep anguish over the BJP’s plan to pass the CAB, AASU president Dipankar Nath said: “The Narendra Modi government wants to pass the communal and unconstitutional citizenship bill to offer protection to illegal Bangladeshis. This attempt to pass the bill is not only against the interests of the indigenous people, but also a violation of the Assam Accord. Besides continuing with the movement against the bill across the Northeast, we are here in Delhi to take our protest to the national level.”

The Jamaat-e-Islami Hind has, meanwhile, opposed the plan to carry out the NRC exercise all over the country, as well as the proposed CAB. In a statement, Jamaat vice-president Muhammad Salim Engineer said: “The Jamaat expresses grave apprehension on the announcement by the home minister of India that the NRC shall be implemented all over the country.”