Health policy pointers for India in China’s tryst with privatisation

The Chinese government’s role today is split between public funding of social insurance for curative services and provisioning of private healthcare. 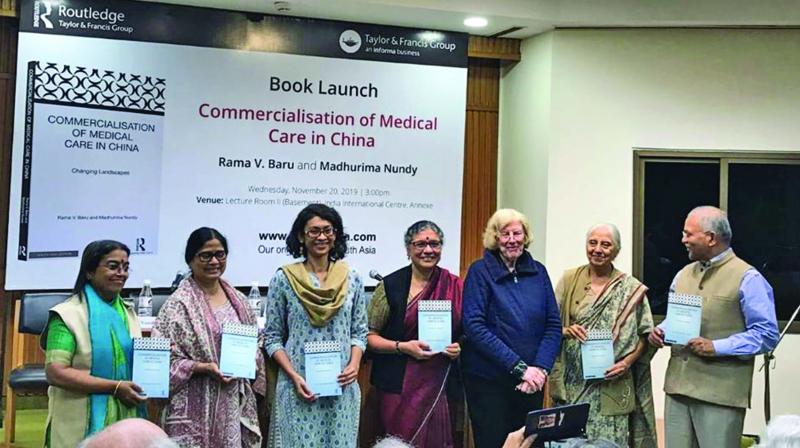 Madhurima Nundy (3rd from left) and Rama V. Baru (4th) at the launch of their book at India International Centre Annexe in New Delhi.

Overprescription of costly drugs, gratuitous diagnostic tests and informal ententes between private clinics and the corner drugstore? These are everyday realities that a patient in every city and small town routinely suffer en route to treatment.

Money may not be the doctor’s dilemma as much as it is that of the unethical businessman; and it is inevitable for private healthcare providers to see illness as a market to exploit and have the shareholder’s and not the patient’s best interests at heart. Yet, call it a failure of public funding or of policymaking; or call it the principle of liberalisation and fair play, private sector participation in healthcare is here to stay in India and at the global level.

Interestingly, India is not alone in its struggles to balance equity with profitability in this domain, and insurance costs with, say, revenue. The experience of a large economy next door, that of China, which, significantly, has followed an egalitarian model of development, offers lessons and clues to our problems. These have been carefully researched and cogently presented to policy enthusiasts in the field by Rama V. Baru, faculty at the Centre of Social Medicine and Community Health, Jawaharlal Nehru University (JNU), New Delhi, and Madhurima Nundy, sociologist and assistant director at Indian Institute of Chinese Studies, in a slim volume titled Commercialisation of Medical Care in China: Changing Landscapes (Routledge, pp.112, `695).

It would indeed be the original sin of liberal illiberalism if we refuse to look at these invaluable insights that have come up in this process and not pressure policymakers to factor them into their thoughts on the viability of Ayushman Bharat and the challenges of the Accredited Social Health Activist programme, the building block of India’s sadly-neglected National Rural Health Mission. The ASHAs are indeed India’s equivalent to China’s barefoot doctors — community health workers trained by allopaths to man the network of primary-level healthcare centres in the world’s most populated country. With privatisation kicking in starting 1978, the barefoot doctors have decreased in numbers.

The late 1970s saw the advent of market socialism in China leading to decollectivisation of agriculture and the collapse of the cooperative medical scheme which funded basic healthcare. Public hospitals were commercialised and autonomised. Foreign capital entered the business through manufacturing and sale of medical devices soon after economic liberalisation in the 1980s. The 1990s saw the growth of private hospitals at the secondary and tertiary levels by Chinese entrepreneurs in the eastern and southeastern provinces, especially in Beijing and Shanghai.

Quite laudably, China had achieved near-universal health coverage with 90 per cent of its rural population enjoying it by this time. By 1985, however, this percentage had fallen to 5.4 per cent. The 1990s saw rapid increase in out-of-pocket health expenditure and inability to access care. It led to a reversal in health status indicators and a resurgence of communicable diseases such as tuberculosis.

So what are the lessons that the China experience in privatising medical care provide us? These are three-fold. The first is that at 6.36 per cent of its gross domestic product China invests about five-and-a-half times more than India in healthcare. India invests only 1.15 per cent of its GDP in this sector. And for China, this investment is increasing. Second, unlike India where the NRHM has very little penetration and is alarmingly understaffed where it is present, China had already succeeded in building a robust primary healthcare network before it shifted to market socialism. This, as well as the availability of government funding, has enabled it to undertake course corrections whenever public health indicators have dipped too low or there has been any kind of crisis. For instance, the Severe Acute Respiratory Syndrome (SARS) epidemic in 2003 had acted as a wake-up call for the Chinese government which responded by reinvesting in and strengthening primary-level ‘gatekeeper’ healthcare. Third, the government has reinvested in a deeper public health insurance scheme. This happened when out-of-pocket expenditure of citizens shot up in the first decade of commercialisation to 60 per cent of the population. With government intervention, this figure has again come down and is now at 30 per cent.

The Chinese government’s role today is split between public funding of social insurance for curative services and provisioning of private healthcare. Its now-limited investment in public institutions, especially at the multi-specialty (‘sub-specialty?’) level, means the imperative to generate revenue in the short term through healthcare remains an important goal. This brings up the question, should all arms and activities of the government be aimed at fiscal prolificacy? Pertinently, China continues to be the world’s largest manufacturing economy and exporter of goods with a growth rate that is currently higher than that of India.

Says Prof. Baru, author of the study and part of a pioneering unit of China watchers in public health: “Why don’t you see the value in investing in education and health? Even medical education has now been commercialised in India. Indian students from lower income households who do not make it to government colleges are moving out to China and Ukraine for medical education because the course fee is cheaper. It is leading to money going out of the country and brain drain. Upon return, these students who have opted for the English medium courses of medical study which are of a lower standard are unable to clear exams and compete with homegrown doctors.”

However, the private sector’s influence in this field is irreversible. “That’s because when markets come in, they reconfigure the health sector. There is a certain logic of the market that plays out in this case and the public sector is increasingly being transformed by its presence. That is what the China experience shows us, that the public sector as we once knew it is no longer there anymore,” Prof. Baru says.