One of his bodyguards quickly offered support and Amit Shah managed to get up unhurt immediately. 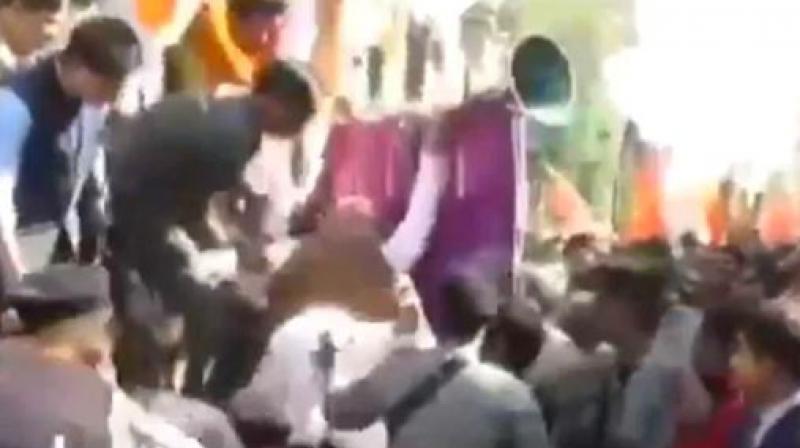 The incident happened at the Tulsi Park. (Photo: Screengrab)

Ashokanagar: BJP president Amit Shah stumbled and fell while alighting from a vehicle after his roadshow in poll-bound Madhya Pradesh on Saturday.

One of his bodyguards quickly offered support and Amit Shah managed to get up unhurt immediately. The incident happened at the Tulsi Park.

Later, addressing a public meeting in Shivpuri district, Shah continued to fire salvos at the Congress like his previous election meetings and said the chief of the opposition party, Rahul Gandhi, was daydreaming about winning the November 28, Madhya Pradesh Assembly polls.

The state is being ruled by the Bharatiya Janata Party (BJP) since 2003 with Shivraj Singh Chouhan occupying the chief minister's post since 2005.

"While waiting to board a flight at an airport, I saw Rahul baba on a TV channel, claiming that his party was going to come to power in Madhya Pradesh," Shah told the gathering.

"Rahul baba is dreaming in the day that his party is going to form the government in Madhya Pradesh," he said in a retort to Rahul Gandhi's claim made during campaigning that the Congress would form governments in all five states -- Madhya Pradesh, Rajasthan, Chhattisgarh, Telangana and Mizoram -- that are up for polls.

The election results for all these states will be declared on December 11.

Amit Shah further ridiculed Rahul Gandhi by saying that dreaming was not bad, but one should not build castles in the air, that too during the day.

"After 2014 (when the BJP-led National Democratic Alliance took over at the Centre), people have no room for the Congress and it has been wiped out from (most) states. Even with binoculars, its (Congress) traces are hardly seen anywhere," he said.

The BJP chief also took a dig at the opposition party for not declaring its chief ministerial face in Madhya Pradesh.

"Rahul Gandhi, who is your leader in Madhya Pradesh? Is it raja (Digvijay Singh), maharaja (Jyotiraditya Scindia) or a worn-out industrialist (Kamal Nath)?," he asked.

While Scindia is the Congress's campaign committee chief in the state, Nath heads the party's Madhya Pradesh unit and Singh was the chief minister of the state from 1993 to 2003.