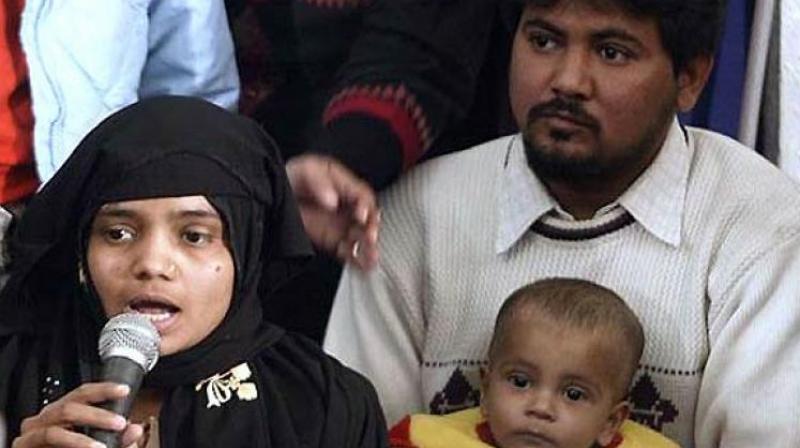 New Delhi: The Supreme Court on Friday granted six more weeks time to the Gujarat government to inform it whether any disciplinary action has been initiated against policemen convicted in the 2002 Bilkis Bano gangrape case.

A three-judge bench of Chief Justice Dipak Misra and Justices A.M. Kanwilkar and D.Y. Chandrachud listed the plea for hearing in the first week of January.

The bench, however, made it clear that the separate plea, seeking enhancement of compensation to be awarded to Bilkis Bano, would be taken up next week for hearing.

The bench granted six weeks time as additional solicitor-general Tushar Mehta, appearing for Gujarat, sought time to take instructions in the matter. Counsel for Bilkis Bano opposed the plea and said in the digital world instructions could be obtained without any delay. She alleged that all the six police officers who were convicted in the case had been given fresh postings and it was not clear whether any departmental action was initiated against them. The ASG, however, informed the court that the police officers who had been given postings had served the sentence imposed on them.

The court had already granted time, on October 23, to the state to apprise it whether any departmental action had been initiated or taken against th convicted police officers.

Counsel for Bilkis brought to the notice of the court that meagre compensation was paid to her. The court said her appeal for higher compensation would be taken up separately.

The Bombay High court had on May 4 had upheld the conviction and life imprisonment of 12 people in the gang rape case, while setting aside the acquittal of seven people including policemen and doctors. Bilkis Bano, who was gang-raped in March, 2002, while she was pregnant, lost seven of her family members in the aftermath of the Godhra train burning incident. The bench listed the plea for further hearing in the first week of January, 2018.