Things changed for the better in the Assam Public Services Commission (APSC) after Sarbananda Sonowal’s BJP government came to power in May 2016. 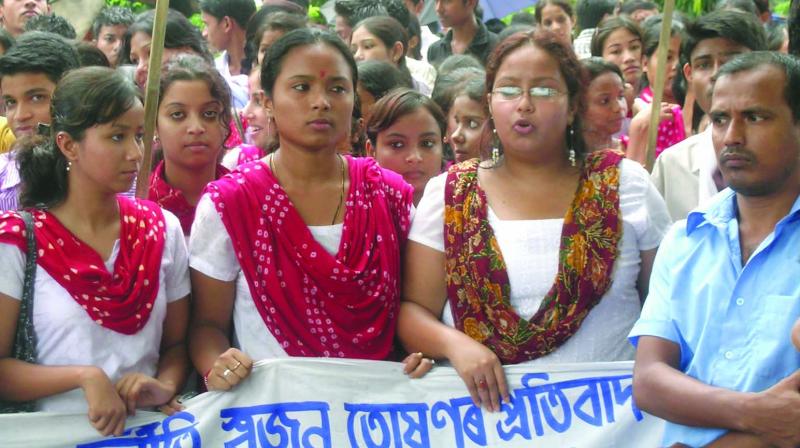 Students and job aspirants protesting against the job scam in Guwahati

Guwahati: Assam police has arrested 23 serving officers so far in alleged jobs-for-cash scam, which has not only exposed corruption, but also revealed as to how talented students were marginalised and siblings of politicians and rich were getting away with a majority of public service commission jobs in Assam.

The scam came to light on Oct. 27, 2016. A lady dentist, who had applied for a job through an examination conducted by the APSC, was approached by a state government employee promising her the post if she paid `10 lakh. A trap was laid and the employee, Nabakanta Patir was caught red-handed while accepting the bribe. Patir was the conduit for senior APSC officials.

During investigation, the police stumbled upon documentary evidence that led to the arrest of APSC chairperson Rakesh Paul and two other commission  members  —  Samedur Rahman and Basanta Kumar Doley — for their role in the scam.

Things changed for the better in the Assam Public Services Commission (APSC) after Sarbananda Sonowal’s BJP government came to power in May 2016.

In June 2017, investigators led by Dibrugarh additional SP Surjit Singh Panesar seized the answer scripts of all 241 candidates who had passed the 2013 APSC exam, and gave a handwriting test to 25 candidates who had by then completed their training and taken up posts in the districts. Their handwriting samples did not match with the writing on answer-scripts, the police said.

It was known later that each of these officers had given between  between `15 lakh and `30 lakh for their jobs.

Among those arrested include a relative of BJP Lok Sabha MP and MoS Railways Rajen Gohain, the son of Nilamani Sen Deka, minister in the Congress government of Tarun Gogoi, journalist, relative of a former Congress MP and MLAs from the state.

Like many public service commissions (PSCs) across the country, the APSC, which recommends candidates for appointment to state government jobs, has been in the news for the wrong reasons for nearly three decades but no government could gather the courage to take effective steps to end malpractices.

The nexus of APSC chairman was such that even after the order of the Gauhati high court for CBI probe he managed to obtain a stay from Supreme Court.

The high court in its observation over the alleged scam in the APSC had stated that among the candidates selected for the Assam Civil Service in 2013-14 was an ex-minister’s son, a minister’s son, a DIG’s son, two daughters of two MLAs, and two close relatives of two journalists.

On October 15, 2015, the court ordered a Central Bureau of Investigation probe into chairperson Rakesh Paul’s assets, and directed the state government to set up an inquiry headed by a retired HC judge into the working of the publc commission.

Just over a month later, however, on Nov. 21, Paul obtained a stay from the Supreme Court on the HC’s order. This stay kept him in office for years — until he was arrested on Nov. 4, 2016. He is still serving time in police custody, source said.

Mr Paul, 54, the son of a headmaster in Tura in Meghalaya, joined the LLM class at Gauhati University in the late 1990s and, after spending a couple of years as a lawyer, became a notary.

Through his political clout is shrouded in mystery, sources known to Mr Paul claim that he was close to the office of one of the former Presidents of India.

In 2008, during former Congress chief minister  Tarun Gogoi’s second term, Mr Paul became a member of the APSC. His eligibility for the position that called for an “outstanding” and “competent” candidate was uncertain.

However, he was the secretary of Satsang Vihar, a religious institution with a fairly large following of Bengali Hindus across Assam. In 2013, Paul became acting chairperson and, Mr Gogoi confirmed him in the post.

Despite a senior personnel department officer noting that making Paul chairperson would give him an unprecedented 11 years at APSC (five years as member and six years as chairman), the formner Gogoi government made him chairperson on Dec. 7, 2013.