India   All India  25 Nov 2017  GST may have fewer slabs in days to come, says CEA Arvind Subramanian
India, All India

GST may have fewer slabs in days to come, says CEA Arvind Subramanian

Subramanian said going forward 12 per cent and 18 per cent GST slabs may probably be merged. 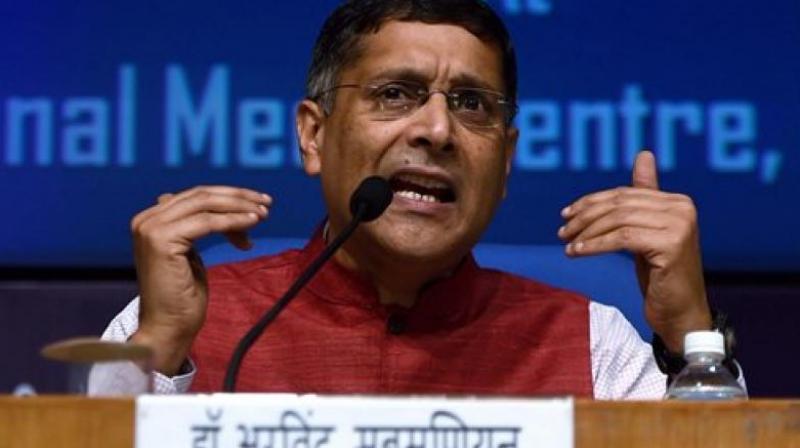 Chief Economic Adviser Arvind Subramanian described the GST implementation as a 'transformational fiscal reform' that the country had not seen in the past. (Photo: File | PTI)

Hyderabad: Chief Economic Adviser (CEA) Arvind Subramanian on Friday said going forward the Goods and Services Tax (GST) may "probably" have fewer rates by "collapsing" 12 per cent and 18 per cent tax slabs into one.

He said the new tax regime, rolled out from July 1, will stabilise in the next six to nine months and become a "model" for other countries.

"I am confident that over the next six to nine months the system will stabilise. It will also be a model for other countries to emulate... Then over time, the 12 per cent and 18 per cent rate can probably be collapsed into one rate. So over time we will see fewer rates. We would not ever have one rate because that is too difficult to achieve," he said.

The CEA was delivering a lecture at the ICFAI Institute of Higher Learning at Hyderabad.

Admitting there were some technical glitches in the filing systems under the regime, he said the new system is a bit "complicated" as states have different IT systems and these issues are being addressed by the GST Council.

Subramanian described the GST implementation as a "transformational fiscal reform" that the country had not seen in the past.

"The Centre and every state has its own tax officials and own IT system. I can't tell you how complicated the system is. So the fact is the transitional glitches, I think, is not surprising. Perhaps I think we could have done better.

"But the most important thing for the GST Council is to decide all these things and take corrective action," he said when asked about technical glitches the taxpayers were facing.