Congress 'demonetised' Manmohan back in 2004: BJP 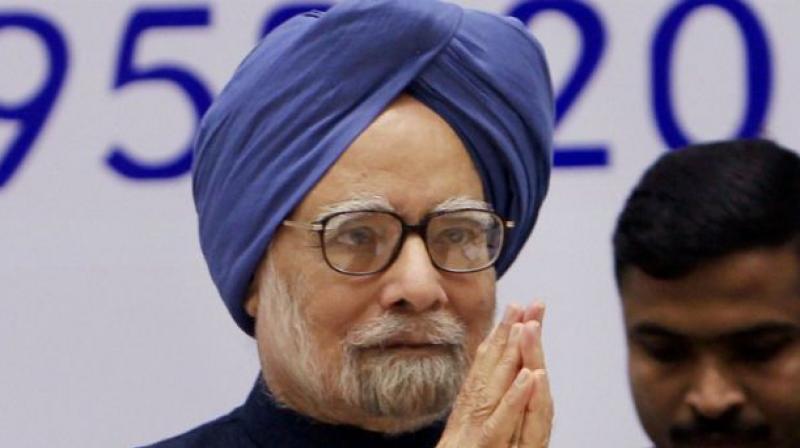 New Delhi: Taking a swipe at the Congress Party and former Prime Minister Dr. Manmohan Singh, the Bharatiya Janata Party (BJP) on Friday said the former was only performing "his duty to his leadership" and not performing the duty for the people of India by speaking the truth.

BJP leader G.V.L Narsimha Rao told ANI that in reality, Dr. Singh was personally demonetised by the Congress in 2004 and his mind had been totally conditioned by party president Sonia Gandhi and vice president Rahul Gandhi.

"He doesn't have the authority to speak his mind, he never took a stand as Prime Minister, and he never questioned his party leadership. He was a nominee Prime Minister nominated by Sonia Gandhi, and today, when he makes certain allegation against the present government; he is actually reflecting and speaking the mind of Rahul Gandhi. He is only performing his duty to his leadership and not performing the duty for the people of India by speaking the truth," he said.

Lashing out at the previous UPA government, Rao said that the reality is that this move was also considered by the UPA, but they didn't have the political authority to go ahead.

"Dr. Manmohan Singh lacked the leadership mettle to take a decision of its kind. And as regards cash transactions, his own government at one time had brought in a cash transaction tax. So for Manmohan Singh to question this decision is high risk political opportunism and, we expect Dr. Singh to speak like an economist, speak like a statesman, but he spoke like Rahul Gandhi," he added.

Former Prime Minister Manmohan Singh termed in the Rajya Sabha on Thursday the demonetisation of Rs. 500 and Rs. 1,000 notes an "organised loot and legalised plunder."

Dr. Singh said that while he didn't disagree with the objective of the government, a "monumental mismanagement has taken place."

Meanwhile, Criticising the Bharatiya Janata Party (BJP) led-NDA government for poor implementation of the demonetisation of high-value currency notes, Shiv Sena president Uddhav Thackeray asserted that Prime Minister Narendra Modi should have taken the views of his predecessor Dr. Manmohan Singh seriously as he is an eminent economist before implementing the scheme.

Thackeray said there is no meaning in the Prime Minister getting emotional and shedding tears during his speeches, adding the latter should have instead made efforts to wipe out the tears of the general public.

Both Houses of Parliament were yesterday adjourned over the demonetisation issue.

The Rajya Sabha resumed discussion on scrapping of high value currency notes in the presence of Prime Minister Modi in the pre-lunch session.

The House could not carry out the same in the post-lunch session as the Congress members insisted on the Prime Minister's presence throughout the debate.

Finance Minister Arun Jaitley charged the opposition with looking for new reasons to run away from the debate.