Kanda is accused of allegedly abetting suicide of a young air hostess who worked for his aviation company in 2012. 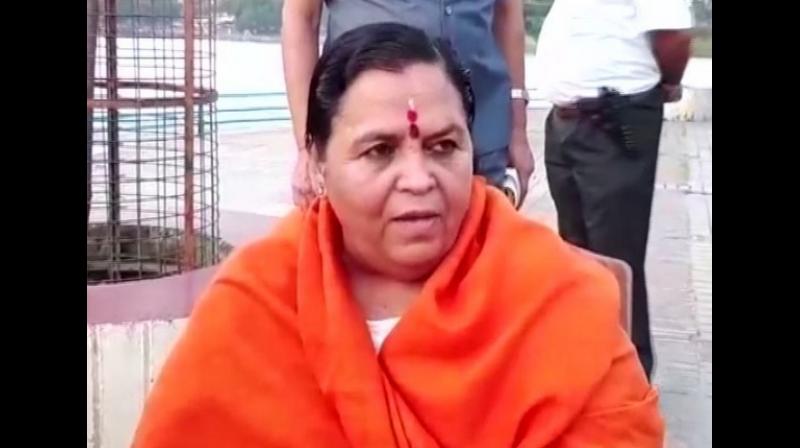 'If Gopal Kanda is the same person because of whom a girl had committed suicide and her mother also committed suicide as she did not get justice. The case is still pending in court, and this person is out on bail,' she tweeted. (Photo: ANI)

New Delhi: Expressing discontent over Lokhit Party leader Gopal Kanda offering support to Bhartiya Janata Party in Haryana, senior BJP leader Uma Bharti on Friday requested her party to not forget the moral values of their organisation's foundation and asserted that only people with a clean background should be partnered with.

Kanda is accused of allegedly abetting the suicide of a young air hostess who worked for his aviation company in 2012.

The BJP leader said that the party must form the government in Haryana but with the support of people with a clean image.

"I would like to request BJP that we should not forget the morals of our party's foundation. We have the power of Narendra Modi and the whole nation and the world are with him. Modi ji has built the power of nationalism on the basis of 'Satoguni' energy," she tweeted.

"Our government must be formed in Haryana, but we should have people with a clean background with us, just like our BJP workers," Bharti said in a subsequent tweet.

Earlier, Kanda said that six to seven independent candidates have pledged unconditional support to BJP after talks with their top leadership.

A former Haryana minister, he has won from Sirsa assembly seat by a margin of 602 votes defeating independent candidate Gokul Setia.

With 40 seats in the 90-member Haryana assembly, BJP needs the support of six MLAs to cross the half-way mark to retain power in the state.