Strength of Congress in the 230-member MP assembly has increased to 115 with the party’s victory in the Jhabua by-poll, held on October 21. 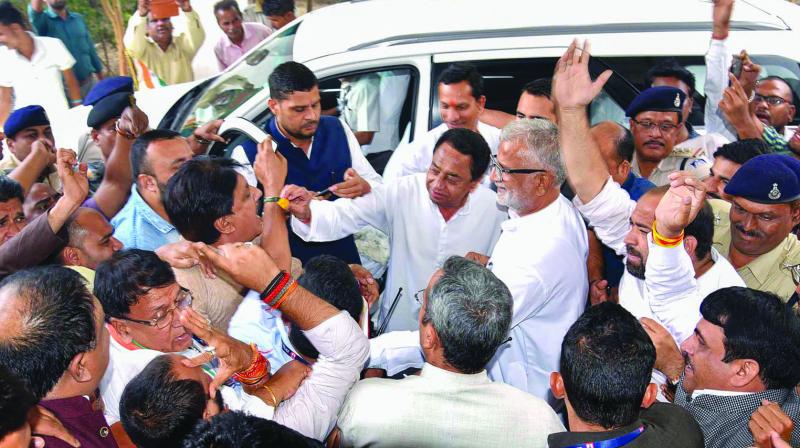 Bhopal: Ruling Congress has won the by-elections in Jhabua (ST) assembly constituency in Madhya Pradesh, results of which were declared on Thursday, leading the ten-month-old Kamal Nath government to secure majority in the house.

Strength of Congress in the 230-member MP assembly has increased to 115 with the party’s victory in the Jhabua by-poll, held on October 21.

However, the effective strength of the treasury bench in MP house has gone up to 116, the magic number to get majority, since Independent MLA Pradip Jaiswal has already been inducted in the state ministry.

Congress which returned to power in MP in 2018 assembly elections after a gap of 15 years by winning 114 out of total 230 seats in the state has formed the government with outside support from two Bahujan Samaj Party (BSP) MLAs, one Samajwadi Party (SP) legislator and three Independents.

Chief minister Kamal Nath had appealed the voters during his campaign for the by-election to ensure victory of Congress candidate and former Union minister Kantilal Bhuria in the seat to help his government get majority in the house.

Mr Bhuria defeated his nearest BJP rival Bhanu Bhuria, who had made his electoral debut in the by-poll, by a margin of 27,804 votes. While Congress polled 96,155 votes, BJP bagged 68,351 votes.

“The victory of Congress in Jhabua is an endorsement of achievements of my government in the last ten months by the people”, Mr Nath said.

Mr Nath slammed the BJP for misguiding the people by launching a campaign that no farmer in MP was benefitted by his loan waiver scheme and added that the BJP had put up bad shows in Maharashtra and Haryana assembly elections too for trying to divert people’s attention from real issues.