#MeToo will take time... at last women are speaking up

It was gratifying to see Hindustan Times’ Prashant Jha step down as the chief of bureau after allegations of sexual misconduct hit the headlines. 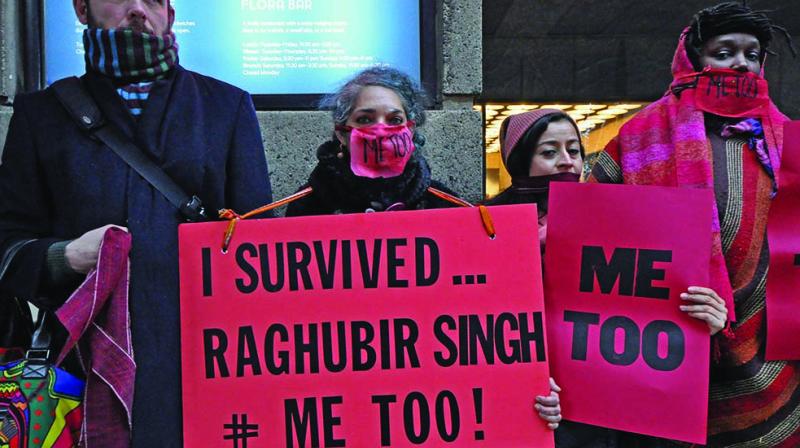 The explosion of stories, accounts naming and shaming sexual offenders, the narratives of harassment and stalking of women by predatory men in power, has reached epidemic levels. Men who we thought to be good and decent are being shamed, men who we thought to be shady but just decided to overlook it are being named, men in power are screaming foul and slapping defamation cases… the #MeToo campaign has spawned many avatars and like goddesses Durga and Kali they are seeking vengeance after years of silence.

Creating a groundswell in the media and the fine arts circuits, many women have openly named themselves, while accusing the perpetrators of unsavoury behaviour face on. Others have chosen to stay anonymous. The behaviour in question could range from male bosses acting lecherous after getting the women employees alone on the pretext of work, to down-right pinning them to the wall and forcing themselves on the unsuspecting women. Not only does it create an unsafe workspace it is a blatant abuse of power and it has been happening for years. It is only now that this unprecedented movement, started by women, for women, has given many the courage to step out of the shadows and speak up.

Artist Jaishri Abichandani was one of the first to bring the #MeToo campaign onto the social media with her protest outside the MET in New York holding the placard, that read, “I survived… Raghubir Singh” (one of India’s famed photographers). The movement soon caught moment especially when women in the media began speaking up as well. Mediapersons like Priya Ramani and Tushita Patel need to be commended for their bravery for going up against someone as powerful as Union minister and former media Mughal M.J. Akbar, a formidable foe with his arsenal of lawyers. It was not long that he rushed to file a defamation case, which is currently being heard although he did resign from his post.

It was gratifying to see Hindustan Times’ Prashant Jha step down as the chief of bureau after allegations of sexual misconduct hit the headlines. The author of How the BJP Wins and Battles of The New Republic: A Contemporary History of Nepal, was unceremoniously dethroned when several women reporters filed written complaints to an enquiry panel set up to look into the complaints of one young reporter who had been at the brunt of his unwanted late night SMS, his getting drunk at office parties and under the excuse of alcohol, trying to hit on his young reporters. Luckily several others stood up for her testifying that they too had faced similar advances and this cemented Mr Jha’s fate.

Even in the funny industry the All India Bakchod released a statement stating that co-founder Tanmay Bhat will step away with immediate effect and Gursimran Khamba will take a temporary leave of absence. It seems that even men with a sense of humour are not above making unwanted sexual advances on their female colleagues. In Bollywood Aamir Khan came out to say he and his wife Kiran Rao have decided to drop out of a project because its producer was accused of sexual misconduct. The list of offenders is endless and one could endlessly scroll down the blacklist. However, I want to address the backlash that inevitably comes in the wake of such a movement.

One of the first questions that I dealt with when the #MeToo and other such campaigns like heardandseen, (#herdsceneand) is, “why didn’t she do something about it then? Why is she talking about it now after so many years?” People who say this have no idea about the kind of fear that women live with, when they are preyed upon by these “men in power”. The first thing that occurred to the young journalist who went up against Mr Jha was that she should be “as nice as she could be” while fending off his inappropriate texts because “My little experience in Delhi has taught me that to “pis***g off a man who’s considered a darling journalist will have sh** repercussions for my career, and or will be at the receiving end of his friend’s wrath or laughter.”

The old boys club that inadvertently pops up like a vampire is a nemesis for women at all workplaces. Why? Because it protects male predators and shames the women who are at the receiving end of these unwanted texts, comments on their body and other “stuff”. Irksomely many men think this is “light flirting” and completely kosher at the workplace, without realising the kind of tension it creates in the minds of young interns who have neither the language or the confidence to fend off such advances. A casual hand on the thigh, or a very inappropriate “come up to my room and I will explain the project to you”, puts women, whether young or experienced, in a state of quandary. One doesn’t want to seem like a prude after working for years in the field and one certainly doesn’t want to lose out on a plum project, so the woman gets lured up to the room only to discover that the “project” involves untoward groping and in some unfortunate cases full on rape.

As a child one has faced all kinds of sexual abuse and if a woman wants to talk about it when she is 40 there should not be any issue with that. Living in a very conservative family one is always afraid to report any incidents of sexual molestation or harassment for the fear that one’s freedom will get curbed and nothing will happen to the perpetrator. Parents often find an easy solution, like don’t go out alone or don’t wear this and that, as if the problem lies with the woman.

The onus is not on women to play safe, but on men to behave themselves in a civilised work environment. There should never be any question about that. #MeToo cannot be dismissed as frivolous and it may take years for the scenario to change but at least we are breaking the silence.