India   All India  25 Oct 2018  Jagan Mohan Reddy stabbed at Vizag airport by man clicking selfie with him
India, All India

The man who stabbed Jagan Mohan Reddy on his left arm, was working as a server at the canteen of the Vizag airport. 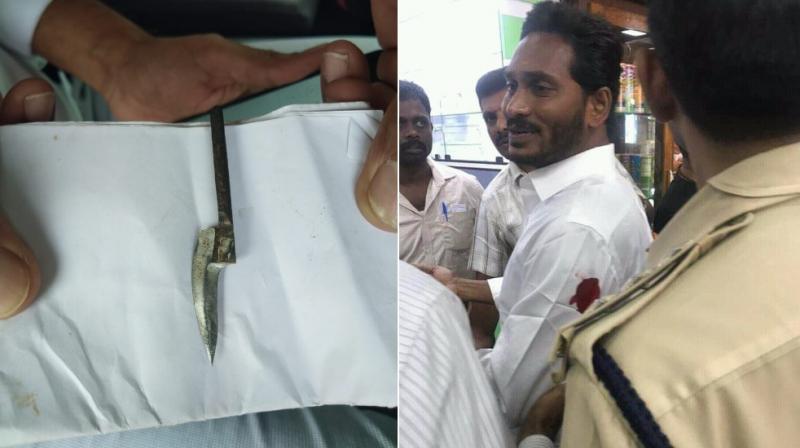 Jagan Mohan received minor injury on his left arm and was given first aid at the airport. (Photo: Twitter | ANI)

Vizag: YSR Congerss chief Jagan Mohan Reddy was stabbed on his arm by an unidentified assailant at Vishakhapatnam Airport on Thursday.

Jagan Mohan received minor injury on his left arm and was given first aid at the airport.

The attacker, identified as Sriniwas, employeed at the airport canteen, said he was trying to click selfie with Jagan Mohan Reddy. When the leader obliged, he pretended to take a picture and stabbed Jagan Reddy with a sharp object.

The small blade used in the attack is usually used in cock-fights, to goad birds to fight aggressively.

The incident took place at VIP lounge of the Vishakhapatnam airport where Jagan Reddy was waiting for his flight to Hyderabad.

The attacker has been taken into custody immediately.

According to the police, the attacker said he did not want Jagan Reddy to come to power.

After the attack, YRS Congress blamed the TDP government for its failure to provide security to the opposition leader.

A leader of Jagan Mohan Reddy's party alleged that the attack was a "conspiracy by the Telugu Desam Party (TDP) government". The leader said: "Srinivas is a staff with airport canteen run by TDP leader Harsha Vardhan."

Rubbishing YSRCP's allegation, TDP a  spokesperson Lanka Dinakar said, "Security at the airport comes under a central agency. We condemn the incident and will conduct a thorough inquiry."

TDP-led by Andhra Pradesh Chief Minister N Chandrababu Naidu also said that it was "unfortunate" that Jaganmohan Reddy had blamed the ruling party.