Eradicate terrorists within your country: Tillerson's blunt message to Pak 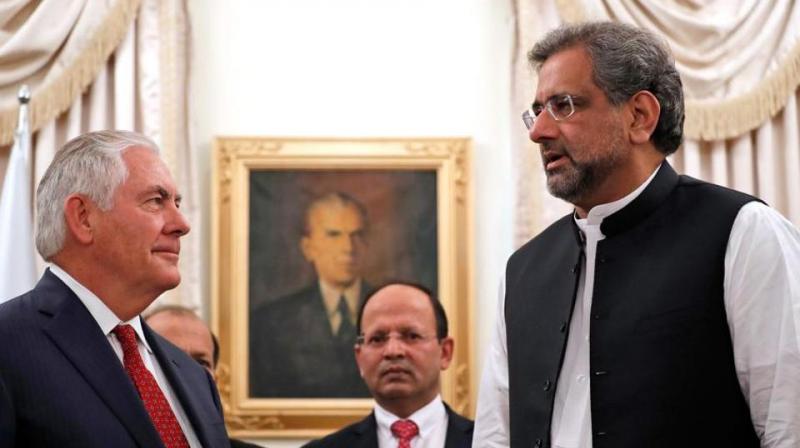 Islamabad: US Secretary of State Rex Tillerson, on Tuesday, bluntly told Pakistan's top leadership that it must increase efforts to eradicate terrorists operating within the country.

During his meeting with Prime Minister Shahid Khaqan Abbasi, Tillerson discussed the bilateral cooperation and partnership, expanding economic ties between the US and Pakistan, and Pakistan’s critical role in the region.

The US embassy in Islamabad said that the Secretary reiterated President Trump's message that "Pakistan must increase its efforts to eradicate militants and terrorists operating within the country."

To address those concerns, the Secretary outlined the United States’ new South Asia Strategy and the vital role that Pakistan can play in working with the US and others to facilitate a peace process in Afghanistan that can bring stability and security to the region, the embassy statement said.

During the meeting, Abbasi assured Tillerson that his country is committed to the war against terrorism.

"The US can rest assured that we are strategic partners in the war against terror and that today, Pakistan is fighting the largest war in the world against terror," Abbasi said.

Abbasi said Pakistan is "committed in the war against terror."

He said Pakistan has produced "results" in its war against terrorism and it was looking forward to moving ahead with the US and building a tremendous relationship.

So far no official statement was issued by Pakistan but Defence Minister Khan talking to Geo TV said that all aspects of relations were discussed and there was agreement to increase cooperation to defeat militancy.

"They asked Pakistan to take action against groups which are involved in militancy and also urged Pakistan to help create peace in Afghanistan," he said.

He said the Pakistani side insisted that its efforts for peace were derailed twice -- once when the news of the death of Mullah Omar was divulged and second when Taliban leader Mullah Mansoor was killed.

He said Pakistan the tone of the US delegation was reconciliatory and it insisted that Pakistan’s role was important for regional peace as it lies between India and Afghanistan.

Khan said that Pakistan also highlighted the issue of Indian presence in Afghanistan and raised concerns about New Delhi's role in security affairs in the war-torn country.

"We said that we do not have any issue with Indian development work in Afghanistan but we have issued with its security role," he said.

He said the US official tried to "tell us that India is not a threat to Pakistan but our perception was different".

He said Tillerson expressed gratitude to Pakistan in securing the release of the Boyle-Coleman family from Taliban captivity.

Earlier, Tillerson quietly landed at a military airport in Rawalpindi in the afternoon and was driven to US embassy where he was briefed by senior US officials about relations with Pakistan.

He later met Abbasi at the Prime Minister House and held detailed talks on various aspects of relations.

It was Tillerson’s first visit to the region after Trump unveiled his policy for Afghanistan and South Asia.

Trump's remarks in August unruffled the ties already under strain due to various issues.

Pakistan regularly denies that it hosts terror groups fighting the US and Afghan forces in Afghanistan.

Trump's criticism led to further strain in US-Pakistan relations with a peeved Islamabad saying the president ignored its efforts in the war against terrorism.

Tillerson flew to India after his meetings in Islamabad, where he is expected to meet Prime Minister Narendra Modi and External Affairs Minister Sushama Swaraj.