India   All India  25 Sep 2020  Farmers across India rise up against Centre's farm bills; Opposition parties back protests
India, All India

The principal Opposition party, Congress, alleged that the new agriculture laws will 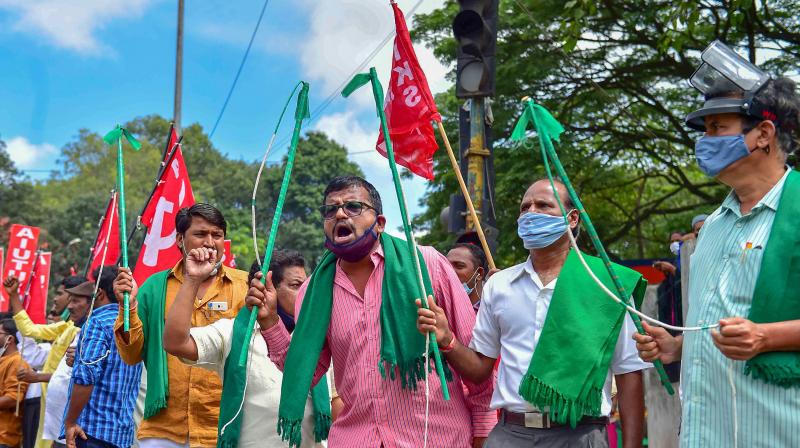 Punjab and Haryana, the breadbaskets of India, took the lead as farmers across the country took the streets on Friday to protest against the Centre's three contentious farm bills, which were recently passed by the Parliament.

Farmers at several places in Punjab started gathering at roads for stopping the movement of traffic. Women protesters under the banner of Kisan Mazdoor Sangharsh Committee in Amritsar took out a protest march. Shops and commercial establishments at many places in Punjab remained shut on Friday morning in the wake of farmers' stir. Shopkeepers had promised to keep their shops shut in support of farmers.

In Punjab, farmers also started a three-day rail blockade against the bills and squatted on tracks at many places.

The protesters have expressed apprehension that the Centre's farm reforms would pave the way for dismantling of the minimum support price system and they would be at the "mercy" of big corporates. The farmers said they would continue their fight till the three farm bills were revoked.

Farmer groups in Haryana urged residents to observe a bandh from 10 am to 4 pm on Friday. However, the National Highways were exempted from the bandh call. Several organisations in Haryana, including the BKU, also extended support to the nationwide strike called by some farmers' bodies against the bills.

The Delhi-Amritsar highway was blocked at several places by farmers from the BKU and the Revolutionary Marxist Party of India. The Haryana farmers also blocked the Rohtak-Jhajjar road. Protests were also held at several places, including Rewari and Yamunanagar.

In National Capital Regoion, hundreds of farmers gathered on a key road in Noida in Uttar Pradesh, prompting deployment of police in riot gear that kept them from proceeding towards Delhi.

The farmers were at the Noida Gate in Sector 14A near Chilla, at the UP-Delhi border, where they were stopped by the Gautam Buddh Nagar police around 12 noon, officials said.

"Today's protest is part of a bigger statewide and nationwide agitation by farmers against the farm-sector-related bills passed in Parliament recently. The farmers are opposed to these 'black laws'. Our demand is that a law should be made that fixes the MSP (minimum support price) as the lowest amount for purchasing crops from farmers," BKU's Meerut Zone president Pawan Khatana said.

Elsewhere, farmers in Karnataka staged demonstrations across the state on Friday as part of a 'bandh' call given to protest the 'anti-farmer' policies of the Central and state governments. A large number of ryots from various parts of the state flocked to the state capital to take part in the demonstrations to register their protest against the amendments to the Agricultural Produce Marketing Committee Act and the Karnataka Land Reforms Act.

The protesters called these amendments 'anti-farmer' and alleged that some people in power brought them to converttheir black money into white. A group of farmers blocked the busy Tumakuru road near Yashwantpur in the city. Demonstrations were also held in other places, including Mysuru and Davangere.

While the ruling Congress in Punjab and the AAP extended support to the farmers' protest in Punjab, the Shiromani Akali Dal announced road blockades. Punjab CM Amarinder Singh had already promised that and no FIRs would be registered for violation of Section 144, which bars assembly of more than four people.

In Bihar, RJD leader Tejaswi Yadav rode a tractor along with party supporters during 'Bharat Bandh' in Patna. Various Left wing parties too held protests on the roads of Patna. Similar scenes were witnessed in Jharkhand's capital Ranchi as well as Kolkata and Guwahati.

The principal Opposition party, Congress, alleged that the new agriculture laws will "enslave" farmers and the MSP will be "snatched away" from them.

Congress general secretary Priyanka Gandhi also hit out at the government, saying the three farm bills brought by it are reminiscent of the "East India Company rule".

The MSP (minimum support price) of the farmers will be "snatched away" and they will be forced to become slaves of billionaires through contract farming, Priyanka Gandhi said in a tweet in Hindi. "Neither will they get the price nor respect. Farmers will become labourers in their own land," she alleged.