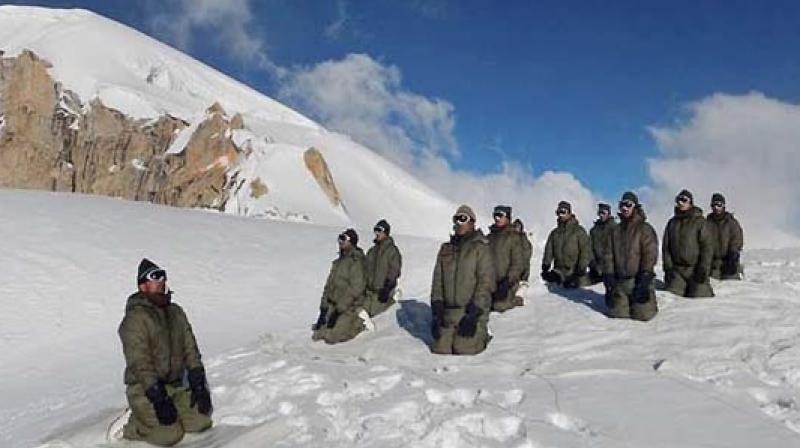 The problem in Siachen is that due to very cold temperatures even biodegradable items do not decompose, so waste keeps on piling year after year. (Photo: PTI)

New Delhi: World’s highest battlefield Siachen glacier is getting a “makeover” with Indian Army launching a ‘cleanliness drive’ under which it has disposed of 130 tonnes of garbage since January 2018.

The problem in Siachen is that due to very cold temperatures even biodegradable items do not decompose, so waste keeps on piling year after year.

“On an average 236 tonnes of garbage is generated in Siachen, every year. Our aim is to remove atleast 100 tonnes of waste every year,” said a senior official.

He said that presence of sizeable numbers of troops saddled the glacier with tonnes of waste and the Army is determined to rid the area of pollutants.

“The process of waste generation is essentially rooted in the survival of troops present on the glacier and their need to be operationally prepared and logistically supported to undertake combat operations in such terrain and weather conditions,” said the official.

Notwithstanding the challenges, he said that the ecology in the glacier, which is an abundant source of fresh water can’t be allowed to degenerate due to prolong presence of troops and resultant generation of waste.

The “Swachh Siachen Abhiyan (SSA)” was launched by Army in January 2018 to preserve the ecology in the region.

The Army has put up a paper bailer machine which converts the paper cartons and other such things which are reusable. As far as non-metallic waste is concerned, Army has put three incinerators at three different places and now, it is looking for industrial crushers, which can help in disposing off the metallic waste.

Army is also sensitising its soldiers on waste management.