India   All India  25 Sep 2018  Swachchh Bharat Mission has to translate beyond photo-ops
India, All India

Swachchh Bharat Mission has to translate beyond photo-ops

Going beyond the crumbling waste management infrastructure, our people have to change their mindset. 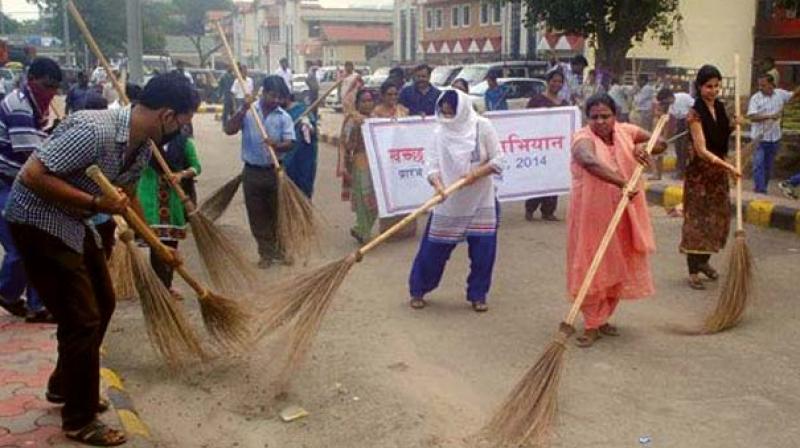 Our cities are still littered with urban waste, plastic bags and the omnipresent gutka packets.

I was quite struck by this cute advertisement on the TV the other night, Varun Dhawan and Alia Bhatt take a trip to the moon, and as soon as they land, Alia litters the planet with a candy wrapper. Varun scolds her and tells her to pick it up, saying something to the effect that we have already littered one planet with urban waste, do you want to ruin the moon too? Although I wish the gender roles in this Ad were reversed, it is a sentiment I hold dear to my heart, because I firmly believe that while we need a lot of infrastructure around waste management in cities, what we need more is for people’s attitude to change towards public littering. My contention is that a greater sense of ownership of public spaces is what will change people’s attitude towards keeping our city clean.

While we talk a great story when it comes to keeping our city clean, and the conversation on the need for better management of waste has progressed, the needle has barely shifted on the outcome. We are yet to see an attitudinal change where people adopt the ideas propagated on large shiny billboards that dot our metropolises. Our cities are still littered with urban waste, plastic bags, the omnipresent gutka packet, the thermocol and Styrofoam cups and plates that are left over after any Bhandara or mela, the unseparated waste, often lies uncleared, swarming with flies and being feasted upon by cows, dogs and other urban scavengers.

Moreover, no one seems to think its their problem and we are quick to blame sanitary department rather than look at our responsibility to reduce production and distribution of urban waste.

As such we are a fastidious and house-proud people. Most urban homes are clean spaces and yet those very same people, who are so particular about keeping their homes clean, think nothing of littering the city. The caste stigma around picking up the broom has not faded, and people still blame the municipal worker for the state of their city. The Swachchh Bharat Mission has to translate beyond the photo-op of the Bollywood star or politician posing with a broom. There may be times when we actually have to wield it and there should be no sense of shame associated with that act.

Going beyond the crumbling waste management infrastructure, our people have to change their mindset. We have instances and examples from around the world. It is not just cities from developed nations like Calgary in Canada or Adelaide in Australia, but Kigali in developing Rwanda, that has transformed and cleaned “itself” in a relatively short span of time. It is a strategy where the sense of ownership extends beyond our selves and our homes to the common goods and spaces. It has been offered as an explanation that it is our fear of scarcity as a developing nation has led us to be more concerned about our individual or immediate wellbeing rather than our extended surroundings.

As we are changing into an international destination with a developed sense of urbanity and cosmopolitan attitudes to life, this idea of protecting and caring about only the immediate family has to change. We need to develop a larger sense of self that extends to our pride and concern for our city. Our concerns have to turn towards emphasising health and the message has to be coded in our brain at a deeper level. For instance, if we need to realize that it is important to keep our surroundings germ free as it will lead to a greater sense of health and well-being that goes beyond the home.

Dirt is impure and hence it corrupts us to deal with any of it. It is that sense of shame that is encoded into our belief systems that makes us automatically relegate this problem of keeping the city clean to someone else, of lesser social ranking, caste or gender. This is part of the reason why we are struggling to change the approach to waste and it reflects our attitude towards waste. We will ignore the overflowing wastebasket at the hospital if the syringe is new and taken out of a plastic packet. We will be okay wading through a street that is filled with muck to buy our packaged and super hygienic products. These mindsets need to change.

If we commit to recycling our waste and stop viewing it as useless, that is one step closer to the solution.

The good old Pavlovian learning method often works wonders. We need to have stricter punitive laws around littering. Fines and other punishments that insight a sense of fear in people does translate into a better regard for cleanliness. Our malls are clean, but our streets are not? We need to lead by example and if our public areas are kept clean, then we automatically as people get a subliminal message that it is our job to keep it that way.

With punishment comes a reward, if we have certain public drives highlighting and praising the good outcome of cleanliness, then it will also translate into a better approach towards keeping our city clean.

It will evoke a sense of pride in people and this often leads to people moving beyond the symbolic idea of pride into an actualization of the emotion. Our competitive streak needs to go beyond just our own well-being to a sense of whose neighbourhood is the cleanest? The multiple stakeholders in this problem of our mindset towards waste needs to be changed. If those latent needs and desires are tapped into, it may result in a sense of change towards public sanitation.

If we were to use the technology available to us like WhatsApp and various other social media to spread this idea of taking pride in a clean city, it will solidify and lead to a sense of overall ‘need’ for cleanliness.

There has to be change on many levels, from the Central government, to the State, to the local urban bodies and committees managing a closed gate society to finally the common person on the street.