Funds in Odisha diverted to projects that were not high on priority. 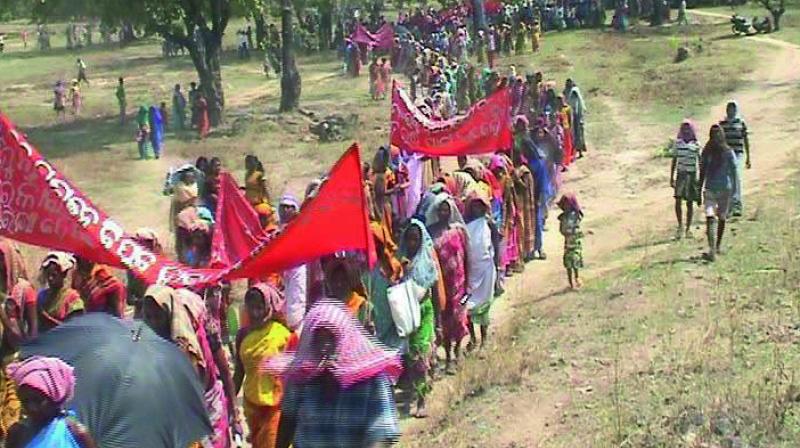 Maoists’ sympathisers hold a rally in their support in Malkangiri district.

Bhubaneswar: Odisha, one of the worst Maoist-hit states in the country, has always been found wanting in taking measures to fight Red terror and provide a peaceful atmosphere to the citizens, especially those living in interior southern and western parts of the state.

According to official sources, the state government failed on more than one occasion in the past four years to prepare annual action plans (AAPs) on time to contain LWE. This resulted in a loss of not only central funds, but also hampered execution of development works.

Also, inclusion of “inadmissible” projects and giving least priority to skill development and livelihood projects in the backward districts provided fodder to the Maoists to spread their wings. The rebels targeted to recruit unemployed and unskilled youths.

The sources said that some of the projects were not on priority, indicating misuse of funds. Some of the funds spent were on construction of staff quarters of government officials, repair and revival of lift irrigation projects, construction of mini stadiums, boundary walls, distribution of solar lanterns, fencing of mango plantations, helipads and rest shade for police and replacement of burnt transfer.

According to the Comptroller and Auditor General of India (CAG) which inspected 43 out of 238 projects, found many of them lying idle.

What has ailed the government’s execution of development works in the LWE-hit areas is inefficient fund management. There has been diversion of funds, non-refund of savings and interest earned by the executing agencies. This led to a loss of central assistance worth Rs 504.30 crore and non-adjustment of advances for years together.While unemployment is a major problem in LWE-hit districts, no livelihood projects were launched under the AAPs between 2011-16.

“More than Rs 3 crore was allocated for execution of 46 livelihood projects, including flyash brick unit and handmade paper unit, niger oil production unit etc, but they could not be implemented successfully,” the sources said. Not only this, if the sources are to be believed, there was gross misuse of the helicopter meant for security purposes.

“During February 2013 to September 2015, out of 341 sorties conducted by the Dauphin helicopter, only 53 sorties were on security related purposes and the rest were for surveillance and monitoring by various officers. These were outside the purview of the Security Related Expenditure scheme guidelines. The Centre did not spend Rs 18.03 crore towards hiring charges of helicopter due to non-obtaining prior approval,” the report said.

Under the integrated action plan, each LWE-affected district was entitled to receive Rs 30 crore per annum and, therefore, the state was entitled to Rs 545 crore during 2011-15. The state government had to fulfill the conditions prescribed by the Centre in September 2014 and October 2014. However, only Rs 582 crore was released as against Rs 1,080 crore for 18 districts.

It may be mentioned here that LWE has emerged as one of the greatest challenges to the internal security of the country.

Odisha assumes strategic significance in the tackling LWE as the corridor of Maoist activities extend from Jharkhand to Andhra Pradesh. During 2011-16, 429 LWE incidents were reported in the state.

Ex-maoists unhappy with rehabilitation package
Odisha government appears to have failed with regard to rehabilitation of those Maoists who gave up arms responding to appeals by the state administration to join the mainstream.

According to reliable sources quoting official data in state home ministry, around 100 of the 171 Maoists who surrendered between January 1, 2014, and February 1, 2016, have availed the government’s rehabilitation package. The remaining did not avail the benefits as they did not meet the minimum criteria laid down by the state government.

The deprivation of surrendered Maoists from availing government benefits has come as a discouragement for other radicals who wanted to lead a peaceful life away from violence.

The sources said that to speed up the surrender process of the Maoists, the state government, with an eye on the coming Assembly elections, is contemplating to amend the rehabilitation guidelines to extend the benefits to a larger number of persons that would contribute to the waning of the Maoists activities.

Illiteracy and ignorance of the surrendered the Maoists often prevent them from availing their rightful rehabilitation entitlements.