Brigadier Rana said the captured terrorist revealed his identity as Hussain, a resident of Sabzkot village of Koti in Pak-occupied Kashmir 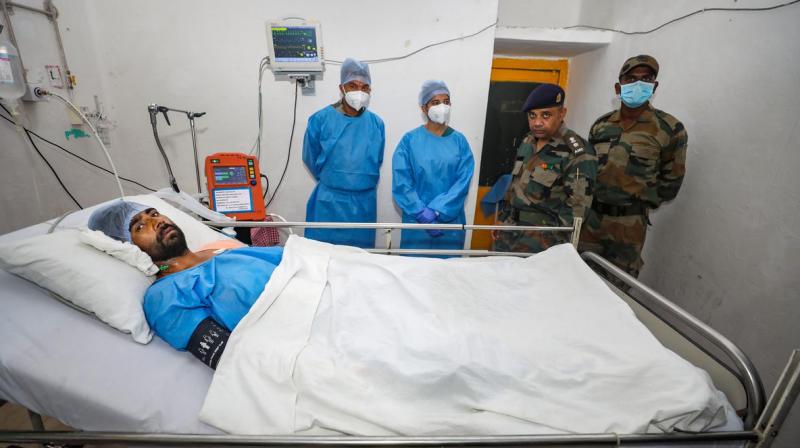 Rajouri/Jammu: A Pakistani terrorist, who was captured in Rajouri district of Jammu and Kashmir, was paid Rs 30,000 by a colonel of Pakistan intelligence agency to attack the Indian Army post, officials said on Wednesday.

Thirty-two-year-old Tabarak Hussain, a resident of Sabzkot village of Kotli in Pakistan-occupied Kashmir (PoK), was arrested in Naushera sector on Sunday after his accomplices abandoned him and fled back after being intercepted by the alert Indian troops. This was for the second time in the past six years that Hussain, who also worked for an intelligence unit of the Pakistani army, was arrested while trying to infiltrate into this side from across the border, the officials said. The Army's 80 Infantry Brigade Commander, Brigadier Kapil Rana, said on August 21, in the morning hours alert soldiers deployed in Jhangar spotted movement of two to three terrorists from across the LoC.

One terrorist came close to the Indian post and tried cutting the fence, when he was challenged by alert sentries. The terrorist trying to flee, however, was brought down by effective fire, incapacitating him, he said.

He said two terrorists who were hiding behind, fled the area by taking cover of dense forest and broken ground. The injured Pakistani terrorist was captured alive and provided with immediate medical aid and lifesaving surgery was carried out.

Brigadier Rana said the captured terrorist revealed his identity as Hussain, a resident of Sabzkot village of Koti in Pakistan-occupied Kashmir.

On further interrogation, the terrorist confessed about their plan to attack the Indian Army post. Hussain revealed that he was sent by a colonel of Pakistan intelligence agency named Col Yunus Chaudhry who had paid him Rs 30,000 (Pakistani currency).

Hussain also revealed that he along with other terrorists had carried two to three close recces of Indian forward posts with an aim to target them at an opportune time. The go-ahead to target the Indian post was given by Col Chaudhry on August 21, the brigadier said.

Hussain confessed his long association with terrorism and said he was trained by Major Razak of Pakistan army.

I was betrayed (by accompanying terrorists) and subsequently captured by Indian Army, Hussain told reporters in a brief interaction at the military hospital. I underwent six-month training and visited several (terrorist) camps (run by Pakistan army) for Lashkar-e-Taiba (LeT) and Jaish-e-Mohammad (JeM) members, he said. Brigadier Rajeev Nair, commandant of the military hospital in Rajouri, said the condition of Hussain is stable. He came to bleed our troops but they saved his life, gave him their blood and fed him by their hands, Nair said.

At the time of the arrest, officials said he was heard shouting Mai marne ke liye aaya tha, mujhe dhoka de diya. Bhaijaan mujhe yahan se nikalo (I had come to die but was betrayed. Brothers, pull me out from here). As per the officials, his hair of private parts was found shaved, which is being done by terrorists when on a suicide mission as seen in the past.

Hussain, along with his younger brother Haroon Ali, were arrested on April 25, 2016 and underwent 26 months imprisonment before being repatriated via Attari-Wagah border in Amritsar. He was cultivated by the Pakistan army and trained to acquire enemy information and establish cover story in case the individual is ever apprehended, the officials had said, adding he underwent six weeks training as a guide at LeT training camp at Bhimber along the LoC. On December 16, 2019, Hussain's another younger brother Mohd Sayeed was also apprehended by army in the same sector, the officials said, adding Sayeed was found to be under heavy influence of drugs at the time of his arrest but he confirmed repatriation of his brothers.