On Sunday, the backwater level rose to 133 metres, 6.5 metres above the danger mark. 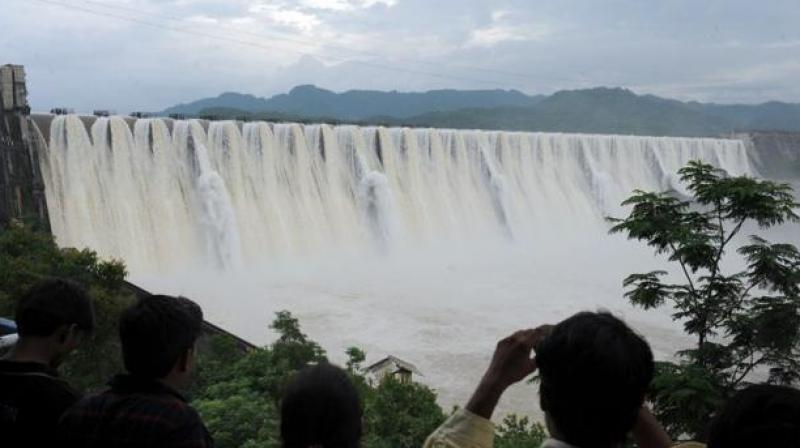 The village is located on the banks of the Uri Baghini river and water released from the Sardar Sarovar Dam over the past 20 days had caused the river level to rise continuously. (Photo: AFP)

Indore: A village in Madhya Pradesh's Dhar district has begun submerging as the level of the backwater of neighbouring Gujarat's Sardar Sarovar Dam started rising over the past fortnight due to heavy rains.

On Sunday, the backwater level rose to 133 metres, 6.5 metres above the danger mark, leaving thousands of trees, large chunk of agricultural land and human settlements in Nisarpur, about 180 kilometres from here, on the brink of going under, an senior official said.

A backwater is part of a river in which there is almost no current and gets created after the natural flow of the river is obstructed due to construction of dams as well as natural causes like vegetation.

The village, two centuries old, has a population of around 10,000 and several of them have moist eyes as they see everything that was part of their lives start to fold up as the water level rises unrelentingly.

It is located on the banks of the Uri Baghini river and water released from the Sardar Sarovar Dam over the past 20 days had caused the river level to rise continuously, Devendra Kumar Kamdar, a leader of the dam's affected people and president of a local traders union, told PTI.

"After heavy rain, water is being released from dams built on Narmada and its tributaries, including Uri Baghini. The water level near Nisarpur is rising rapidly," the NVDA official added.

Kamdar informed that around half the villages in the vicinity have been evacuated, claiming that the situation also highlighted the irregularities and discrepancies in the government's compensation distribution mechanism and the resettlement of displaced.

An official on condition of anonymity contended that several people continued to stay in Nisarpur despite getting compensation and being asked to shift.

The administration has asked people to leave as soon as possible as the water level rises by the hour, an official said, adding that the state government had set up a permanent rehabilitation site as well as temporary tin-sheds for the displaced.

Vehicles were being arranged for the people to shift household items, he added. Residents rue markets, temples, mosques, crematoria, and other sites that have been part of their lives for years now are slowly beginning to disappear.

"These are the places I grew up in, playing with my friends. Maybe the water level will come down during summer but Nisarpur will never be the same again due to large scale migration," said a tearful Yash Patidar. Patidar had a two-wheeler showroom in Nisarpur which he recently vacated.