India and the UAE’s ties have grown by leaps and bounds despite Pakistan’s propaganda offensive against India. 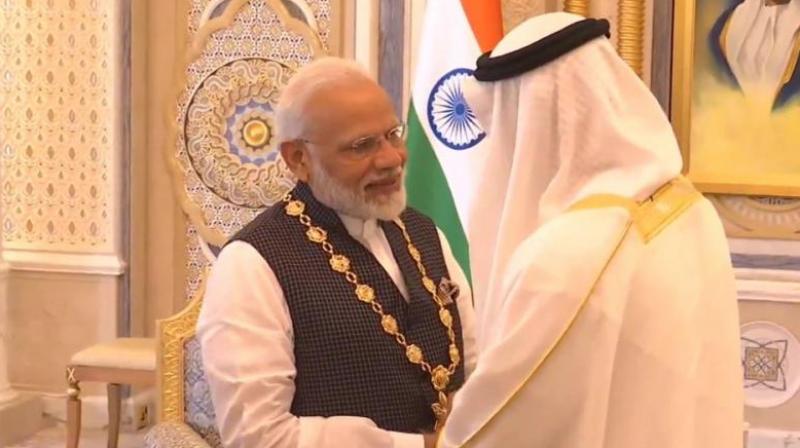 The “Order of Zayed”award was conferred on PM Modi by the Abu Dhabi Crown Prince Sheikh Mohamed bin Zayed Al Nahyan in a ceremony held at the Presidential Palace in Abu Dhabi. (Photo: ANI)

New Delhi: Prime Minister Narendra Modi on Saturday personally received the “Order of Zayed”, the highest civil decoration of the UAE in Abu Dhabi, which was conferred in April this year in recognition of his “distinguished leadership” that has “given a big boost to bilateral relations between the two countries” and his efforts to strengthen ties with Islamic nations.

In another extremely important development, “20 of the most prominent NRI businessmen” in the UAE also “expressed their strong support for participation in the Jammu and Kashmir (J&K) “Invest Event” which is “being planned through investment and human resources (HR) development in J&K”, the MEA’s secretary (economic relations) T.S. Tirumurti told reporters. In another development, both India and the UAE also discussed the issue of “de-radicalisation” which is significant in the context of Pakistan-sponsored religious extremism. India has already been briefing the top UAE leadership about New Delhi’s recent move to bifurcate J&K state and revoke Article 370 to boost good governance. India and the UAE’s ties have grown by leaps and bounds despite Pakistan’s propaganda offensive against India.

The “Order of Zayed”award was conferred on PM Modi by the Abu Dhabi Crown Prince Sheikh Mohamed bin Zayed Al Nahyan in a ceremony held at the Presidential Palace in Abu Dhabi. PM Modi tweeted, “Humbled to be conferred the ‘Order of Zayed’ a short while ago. More than an individual, this award is for India’s cultural ethos and is dedicated to 130 crore Indians. I thank the UAE Government for this honour.” He added, “Had an excellent meeting with His Highness Crown Prince @MohamedBinZayed.We spoke about multiple subjects, including ways to improve trade and people-to-people relations between India and UAE. His personal commitment to strong bilateral relations is very strong.”

PM Modi also launched the “RuPay card” that will “expand network of cashless transactions abroad” and is the “first launch in middle-east”, top officials of the ministry of external affairs (MEA) said on Saturday. Both countries during talks on Saturday decided to step up their cooperation towards overcoming various “challenges” and on measures for “de-radicalisation”. Both nations discussed measures to strengthen ties in the fields of “defence, security, energy, and food security”.

On the RuPay card, Indian government officials said, “The RuPay card was officially launched in the UAE on August 24th 2019 at the Emirates Palace, Abu Dhabi in presence of PM Modi. UAE is the first country in the Gulf where Indian RuPay card has been launched. 21 Business Groups from the UAE ... were present during the event and pledged to accept RuPay as a mode of payment and stated that the initiative will go a long way in bringing India and UAE businesses together. PM Modi swiped his Rupay card for buying Indian sweets.”

Officials added, “UAE receives close to 3 million Indian tourists annually. Acceptance of Rupay card in UAE will lower the charges as tourists will save on exchange rate.  ... RuPay is the first-of-its-kind India’s domestic Debit and Credit Card payment network, with wide acceptance at ATMs, POS devices and e-commerce websites across India. It is a highly secure network that protects against cyber hacks and is India’s version of Master Card and Visa. It has been developed to offer secure, user friendly and cost effective solutions to facilitate low value payments and build a cashless transaction environment.”

PM Modi in presence of the Crown Prince of Abu Dhabi also released postage stamps in the UAE on Mahatma Gandhi to commemorate his 150th Birth Anniversary that falls on October 2 this year.