India   All India  25 Aug 2019  Kashmir Valley remains out of bounds for politicians
India, All India

Kashmir Valley remains out of bounds for politicians

Gandhi told the officials that governor Satya Pal Malik had invited him on social media and he was just reciprocating that through this visit. 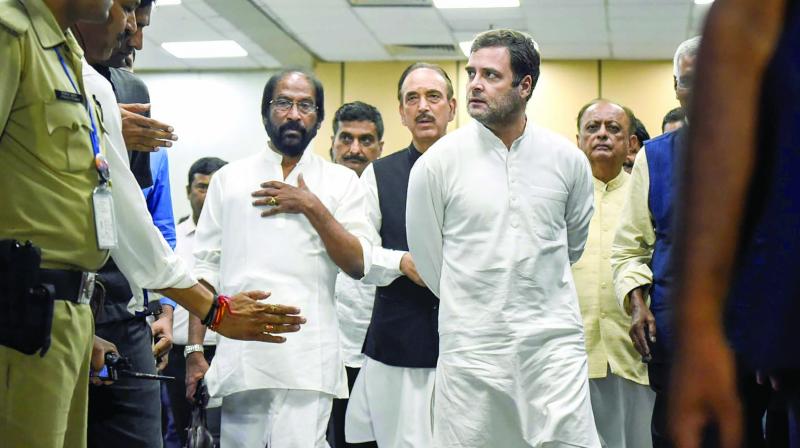 Congress leaders Rahul Gandhi and Ghulam Nabi Azad return from Srinagar at IGI Airport in New Delhi on Saturday. A delegation of Opposition leaders which visited Srinagar to assess the situation in the Kashmir Valley were sent back from the airport by J&K authorities. (Photo: PTI)

Srinagar: The Opposition parties made yet another futile attempt at visiting Srinagar on Saturday to gauge the situation there post scrapping of Article 370. The fact that delegation included high-profile leaders, including former Congress president Rahul Gandhi, did not help their venture.

The delegation of 12 leaders, which included besides Mr Gandhi, Leader of Opposition in Rajya Sabha Ghulam Nabi Azad, senior Congress leaders Anand Sharma and K.C. Venugopal, CPI(M) general secretary Sitaram Yechury and CPI’s D. Raja, boarded an 11.50 am flight for Srinagar which had barely 30 other passengers, besides the sizeable media contingent which accompanied them.

Though there was no official interaction with the media, many leaders expressed hope on the flight that the size of the delegation would help them gain access to the city.

However, as soon as the flight landed in Srinagar, the leaders were whisked away to the VIP lounge, possibly under detention, while the accompanying media people were shooed out of the airport, some of them physically so.

Sources said that at the lounge where the leaders were detained, district magistrate of Budgam and other senior officials asked the leaders to leave the place as it could create trouble. To this, the leaders are learnt to have assured them that they had no intention of creating trouble and only wanted to gauge the situation.

Mr Gandhi told the officials that governor Satya Pal Malik had invited him on social media and he was just reciprocating that through this visit.

“The governor has invited me. He has told me to come...so I have come. And the government is telling us everything is normal. If everything is normal, then why are we not being allowed outside,” he said adding: “if there is Section 144 in force, then we are ready to go individually”.

Some other leaders, including Trinamul Congress’ Dinesh Trivedi and Mr Yechury, asked “where are our colleagues (Omar Abdullah and Mehbooba Mufti). We want to know about that”.

However, when the officials did not allow them and kept asking them to go back, the leader wrote a memorandum which said that the objections to the delegation’s movement outside Srinagar Airport and the apprehensions expressed in the order are baseless. “They are tantamount to allegations against the purpose of our visit.”

“The tone and tenor of the order read out attributes to us motives which are baseless and lack substance,” the memorandum addressed to the DM, Budgam, said.

Despite the arguments made by leaders, the officials asked them to leave, following which they boarded a flight back to Delhi at 3.45 pm.

The flight back though was not without its share of drama when it had to be delayed because of commotion due to VIP passengers.

Sources said that some women who were travelling on the flight narrated their tales to the Opposition leaders. One particular lady, the sources said, claimed that Kashmiris have been suffering even during earlier governments to which Mr Gandhi is understood to have asked “What can we do to win back your trust”.

Earlier, Mr Azad had made two attempts to enter Srinagar and so had Mr Yechury and Mr Raja.