Jaitley’s rise in the party had been steady but it gained momentum with the rise of Narendra Modi. 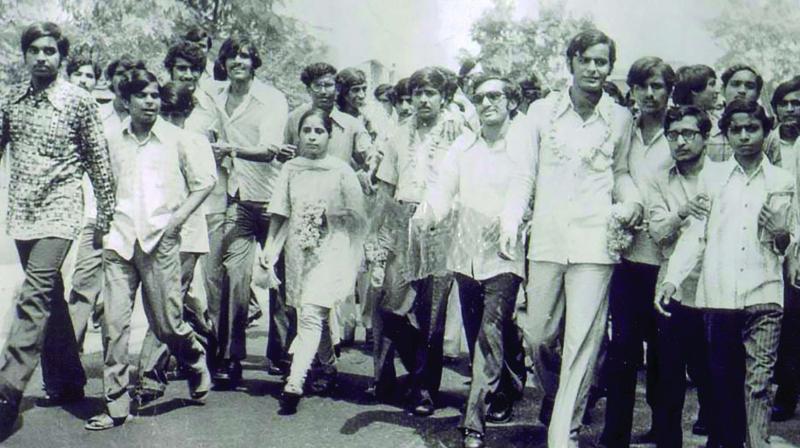 Arun Jaitley after being elected as Delhi University Students Union president in 1974.

Arun Jaitley, who died at the age of 66 was the modern, moderate and liberal faces in the BJP, who rose to become the part of ruling triumvirate along with Narendra Modi and Amit Shah.

In 2002 after the Gujarat communal carnage when the top leadership of the BJP including the then Prime Minister, Atal Behari Vajpayee was toying with the idea for a change of guard in the state, it was L.K. Advani and Arun Jaitley who rallied around Narendra Modi.

Speaking to this newspaper, a BJP leader revealed that after the riots when Vajpayee was  “adamant” in replacing “Modiji”, Jaitley under the instruction of a senior party leader rushed to Ahmedabad to meet Mr Modi and asked him to quit. Mr Modi’s offer to resign pre-empted Vajpyee’s move to sack him as the Hindutva hardliners in the party rushed in to “save the rising mascot.” Jaitley was also the man instrumental in bailing out Amit Shah during the time he was externed from Gujarat.

Jaitley’s rise in the party had been steady but it gained momentum with the rise of Narendra Modi. Some called him, Mr Modi’s “Chanakya” and Prime Minister himself had described him as a “precious diamond.”

Though unlike Vajpayee, he did not like being called the “right man in the wrong party”, he had friends cutting across partyline. He was instrumental in bringing Nitish Kumar led JD(U) back to the NDA fold.

Jaitley apparently was a “close friens” of a many political rivals including Congress’ Kapil Sibal.

In fact, in 1979 Jaitley married Sangeeta Dogra, the daughter of a senior Congress leader Girdhari Lal Dogra. Besides Vajpayee and L.K. Advani even Indira Gandhi attended the wedding.

The BJP under the new dispensation might have developed a healthy dislike for the so called “Khan market gang in Lutyen’s Delhi”, but, “urban polished and refined” Jaitley was “BJP’s face, eyes and ears in Lutyen’s Delhi.”

In 2010 Jaitley wrote in Outlook — “I am a Punjabi by birth and by culture, and as any good Punjabi will tell you —’Changa khana te changa paana.’ (You must eat and dress well).” Some feel Jaitley’s apparent “elitism” was “resented by Sangh leaders, who preferred to lead an austere lifestyle.”

As Jaitley climbed up the pyramid he gained powerful rivals within his outfit.

In 2004, the saffron sanyasan Uma Bharati had accused Jaitley of “plotting” against her. A section of  BJP “mass leaders” claimed that Jaitley’s constituency was “confined to his contacts in the media, judiciary and among the corporates.” Some called him a “durbar politican.”

BJP leaders argued that Jaitley’s “main rise in the party began after the sudden death of Pramod Mahajan” in 2006. During Vajpayee’s regime it was Mahajan who ruled the roost while Jaitley remained close to L.K. Advani. It was revealed that in 1994, though Advani pushed Jaitley for a Rajya Sabha berth from Delhi, Vajpayee reportedly “blocked it.”

Jaitley was born in New Delhi in December 1952 to a family of a lawyer. He attended St. Xavier’s school in Civil Lines. He was in Shri Ram College of Commerce and later pursued law degree at Delhi University. He joined the ABVP and became the Dusu president in 1974. He was arrested during the Emergency and spent nearly 19 months between Ambala and Tihar jails.

In 1999, Jaitley served as minister of state for information and broadcasting (independent charge), later appointed minister of state for disinvestment (independent charge), a new ministry created for the first time. He later took over as law minister in 2000 following the resignation of Ram Jethmalani as the Union cabinet minister of law, justice and company affairs. In 2003 took over as  Union Cabinet minister of commerce and industry. During his tenure as finance minister, Jaitley will be remembered for two major policy decisions — demonetisation and GST, which changed the face of Indian economy.

Over the years, Jaitley had emerged as the main trouble-shooter and a master election strategist till he fumbled big time in Delhi polls where he brought in former team Anna member and IPS Kiran Bedi as BJP’s face for Delhi. The outcome was disastrous as even Ms Bedi lost the elections.

Despite the Modi tsunami in 2014, Jaitley was one of few leaders who lost Lok Sabha polls. He lost to Congress’ Capt Amrinder Singh from Amritsar. Regardless the defeat, Modi held Jaitley as his “closest, after Shah.”    He was given crucial finance ministry and for some time held additional charges of I&B and defence.