Pilot said that the people had given a huge mandate to the BJP, but it squandered the chance to serve people with its ‘misrule of four years’. 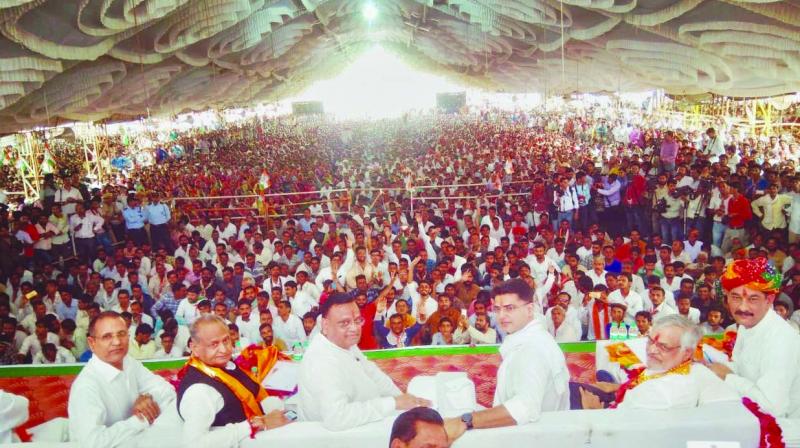 Jaipur: Rajasthan Congress president Sachin Pilot on Friday said that overwhelming response to the party’s Sankalp Rally is proof that people have made up their mind to remove the Bharatiya Janata Party (BJP) from power.

Addressing the first Sankalp Rally in Sanwalia in Chittorgarh, Mr Pilot said that chief minister Vasundhara Raje should have launched a ‘Pashchatap Yatra’ (regret rallies) instead of Gaurav Yatra for reneging on her poll promises to the people of the state. He said that the people had given a huge mandate to the BJP, but it squandered the chance to serve people with its ‘misrule of four years’.

“Hard-earned money of the taxpayers is being used for making Gaurav Yatra arrangements, but the maharani’s government has no money to waive off farmers’ loans,” Mr Pilot said in apparent reference to government orders asking officials to make arrangements for the Gaurav Yatra.

According to him, more than 150 farmers committed suicide during the BJP regime while no farmer had to take his life when the Congress was in power despite there being a severe drought. “People have no interest in the BJP’s expensive show because they have realised that it came to power on false promises and it is not concerned about the people’s miseries,” he said.

The PCC president said that the Congress would provide a government in which farmers would not have to commit suicide, the youth wouldn’t face the agony of unemployment and women would feel safe.

He said that people would get a chance to participate in the Congress government and those in the power would listen to their problems and take decisions to resolve them. “Today all of us swear to gain freedom from the tyranny and misrule of the BJP,” he said.

Mr Gehlot said that the CM did not meet the people during the initial four and half years of her tenure but she was seeking votes from the now because the elections are nearing.

However, he said, citizens have realised that her government is anti-people and they have taken a vow to unseat it.