Nirmala Sitharaman got upset after Karnataka minister asked her to wind up press conference citing lack of time. 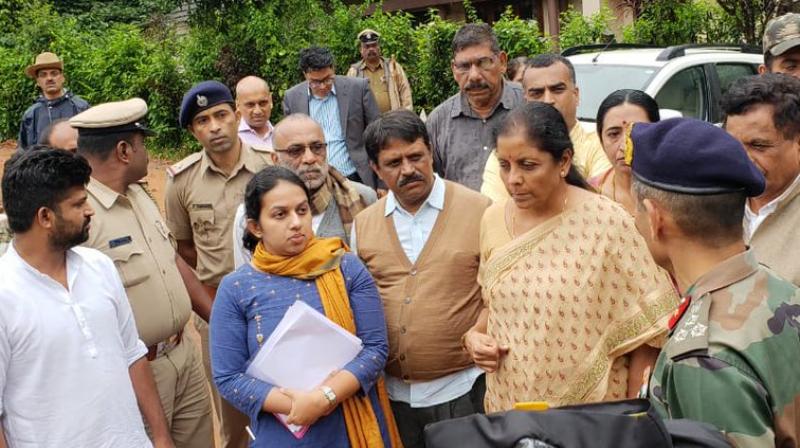 Madikeri (Karnataka): Defence Minister Nirmala Sitharaman got into a heated exchange of words with Karnataka Minister Sa Ra Mahesh when the former was on her visit to Karnataka's flood-hit Kodagu district on Friday to review the army's relief operations.

Nirmala Sitharaman lost her cool at a press conference and blasted Karnataka minister Sa Ra Mahesh publicly, saying, "I follow the minister in charge. Central minister follows the minister in charge here. Unbelievable! You have a list of minute-to-minute for me to follow...I am doing as per your schedule," she said in a spat that was recorded on camera.

The defence minister got upset after the Karnataka minister asked her to wind up the press conference at the district commissioner's office citing lack of time.

"If officials are important, my parivaar (family) is also important,” she rebuked Mahesh at the dais.

When told this conversation was getting recorded on cameras, Sitharaman, a Rajya Sabha member from Karnataka, shot back “Let it get recorded”.

Asked her to speak in the microphone by mediapersons, Sitharaman, still visibly upset, said, "Record whatever you want."

Speaking to Deccan Chronicle, Kodagu district Minister Sa Ra Mahesh claimed that Union Minister Nirmala Sitharaman was angry with him during her visit to Kodagu as he tried to speed up her meetings.

Mahesh said, “While officers waited for Union Minister Nirmala Sitharaman to end her meeting, which was going on for a long time, the meeting with rehabilitation officials was delayed as Union Minister met BJP leaders and others. Since officers had to rush back to the field on emergency rescue and relief works, I tried to convey her to meet the officers first and meet BJP party leaders later. That's when Union Minister Sitharaman got angry with me."

Mahesh also dubbed Sitharaman's comments a reaction to the demand for funds from the centre to Kodagu. "She would have known the pain had she contested election by standing with the electorate, going to every house, meeting voters and asked their problems. She has been elected to Rajya Sabha from Karnataka," he told a TV channel.

The district in-charge minister said the state had requested her to ask the Centre to extend relief for Kodagu just like it did for Kerala.

The torrential rains that lashed the district last week has left a huge trail of destruction and claimed at least 17 lives. More than 5,000 people have been rendered homeless.

Sitharaman on Friday visited many relief and rehabilitation camps in the area, including one of the Seva Bharti camps run by the Rashtriya Swayamsevak Sangh or RSS.