However, the state govt hit back saying it was not inferior to the Centre and Sitharaman should have shown respect. 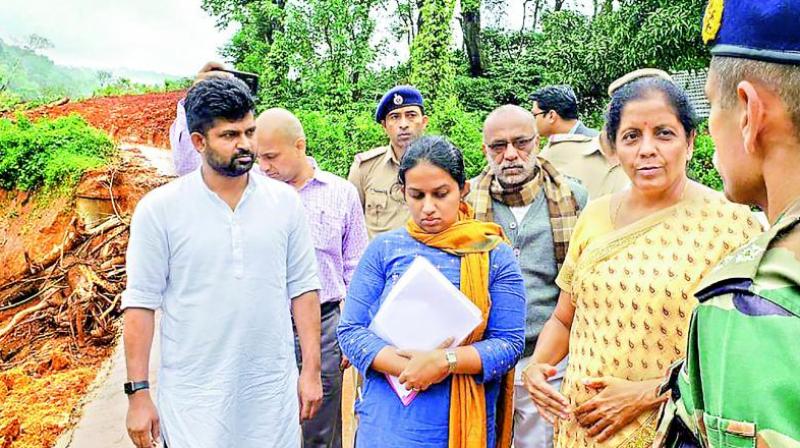 New Delhi/Bangalore: A day after the public spat between Defence Minister Nirmala Sithraman and Karnataka Minister Sa Ra Mahesh over her itinerary, the defence ministry today termed his conduct as "unfortunate", but the state government hit back saying it was not inferior to the Centre and she should have shown respect to its minister.

Sitharaman was speaking at the district commissioner's office with a group of affected people of Kodagu district, where torrential rains had left a huge trail of destruction and claimed at least 17 lives, when Mahesh suggested that she wind up the interaction as a number of government officials were waiting for a meeting with her.

Sitharaman, a Rajya Sabha member from Karnataka, reacted tersely saying she was going by the itinerary approved by the state authorities.

"I am following a minute-to-minute programme, minister. I do not violate that. If officials are important, my parivaar (family) is also equally important. I follow the minister-in-charge. Central minister follows the minister in-charge here. Unbelievable," a visibly miffed Sitharaman told Mahesh, who was sitting next to her, in full view of officials and the media.

"You have a list of minute-to-minute programme for me to follow. If you did have a difference of opinion, you should have sorted it out before," Sitharaman said.

When an official told her that media was recording her comments, she said "Let it get recorded."

The defence ministry issued a clarification today on the incident, questioning the Karnataka minister's conduct, and accusing him of making "personal remarks" that were in "bad taste".

"On completion of the field visits, as per the programme, the defence minister was interacting with ex-servicemen who had been adversely affected by the floods, when the district in-charge minister objected and insisted that meeting with the officials be conducted first," it said.

The ministry said in spite of the district administration finalising her programme and the minister following the same in its "entirety", it is unfortunate that the Karnataka minister behaved the way he did.

"Subsequently, the personal remarks made against the defence minister were also in bad taste, which do not merit a response," the ministry said.

But the Defence minister's remarks drew a sharp response from Karnataka Deputy Chief minister G Parameshwara who said the state governments derive their powers from the Constitution, not from the Centre, and he was disappointed to see her lashing out at his colleague.

"The Constitution has distributed powers among the Centre and states to ensure an equitable partnership between both. We are not inferior to the Centre. We are partners @nsitharamanMadam,, he said in his tweet, before the clarification.

"Madam @nsitharaman, our ministers have stayed back in Kodagu for weeks to oversee relief operations along with district administration. You should extend to them the same respect that they extend for the help from your end. It was disappointing to see you lash out at my colleague," he said.

Congress leader and former Karnataka chief minister Siddaramaiah also criticised Sitharaman, alleging that she was "more interested in dominating our minister" which reflected BJP's "apathy" towards the state.

"One of the four departments of the Ministry of Defence is the Department of Ex-Servicemen Welfare and in that context it was stated that all ex-servicemen are part of the MoD ‘parivar'. Any other inference is misconstrued and uncalled for," it said.

After the incident Mahesh had dubbed Sitharaman's comments as a reaction to the demand for funds from the Centre to Kodagu.

"She would have known the pain had she contested election by standing with the electorate, going to every house, meeting voters and asked their problems. She has been elected to Rajya Sabha from Karnataka," he had told a TV channel.

The torrential rains that lashed the district last week have also left more than 5,000 people homeless.