Rahim had said earlier in Chandigarh that he would appear in person before the court and appealed to his followers to maintain peace. 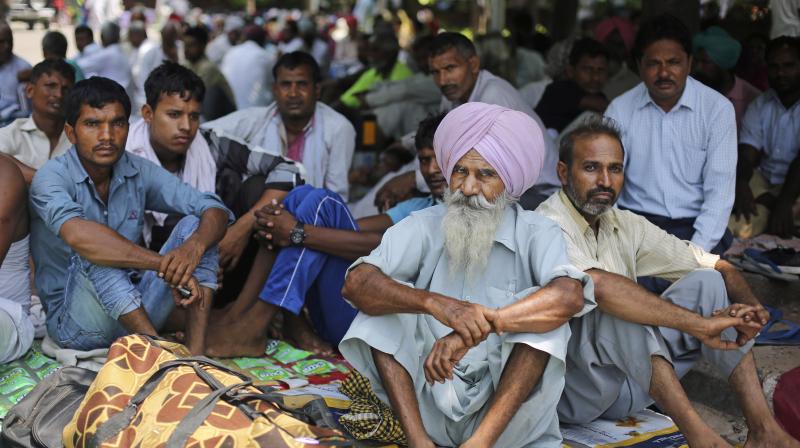 Supporters of the Dera Sacha Sauda sect squat in a public park near an Indian court in Panchkula. (Photo: PTI)

Chandigarh/New Delhi: A day before the Panchkula-based CBI court’s verdict in a sexual exploitation case against Dera Sacha Sauda chief Gurmeet Ram Rahim, curfew was imposed in Haryana’s Sirsa town and security beefed up in other parts of the state, Punjab and Chandigarh on Thursday along with suspension of mobile Internet services for 72 hours.

The Army was put on standby in Haryana and Punjab. Curbs were also put on arrival of public transport buses and trains at Chandigarh and Panchkula.

Rahim had said earlier in Chandigarh that he would appear in person before the court and appealed to his followers to maintain peace.

Sensing trouble from the Dera chief’s followers, who have been arriving in Panchkula for the past few days, the Union home ministry rushed over 15,000 security forces’ personnel to the two states, along with Chandigarh, to assist the local police in maintaining law and order.

The Punjab and Haryana high court earlier criticised the Haryana government for allowing a massive buildup of Dera Sacha Sauda followers in Panchkula, and directed the Centre to provide security ahead of the CBI court’s verdict.

A senior home ministry official in New Delhi said: “Adequate forces have been rushed to the two states. Our officers are in constant touch with officials in Haryana and Punjab. Security forces have conducted flag marches in Panchkula, Sirsa, Hissar and other areas. Hospitals have also been put on alert.”

A joint control room of Haryana and Punjab is being set up in Chandigarh for better coordination between the police and administration, he said.

In an attempt to check gathering of large crowds, prohibitory orders have been imposed in all districts of the two states and schools have been ordered shut on Friday. Dera followers are also being relocated to secure sensitive areas, he said.

According to a Northern Railway spokesperson, 22 trains to Punjab and seven to Haryana have been cancelled. The trains would have made 74 trips over the next four days.

According to Haryana’s additional chief secretary Ram Niwas the decision to suspend mobile Internet services was taken at a coordination committee meeting of Haryana, Punjab and the UT held under the chairmanship of Punjab governor and Chandigarh administrator V.P. Badnore.

Ten senior IPS officers have been deployed and two additional director-general-level police officers have also been appointed to ensure the peace, he said.

The CBI case was registered against the Dera chief in 2002 on the high court’s directions after anonymous letters were circulated about the alleged sexual exploitation of two female followers against him.