Army arrives in Panchkula, tight security ahead of court verdict

Singh left Sirsa by road for Panchkula to appear before a special CBI court in the sexual exploitation case against him. 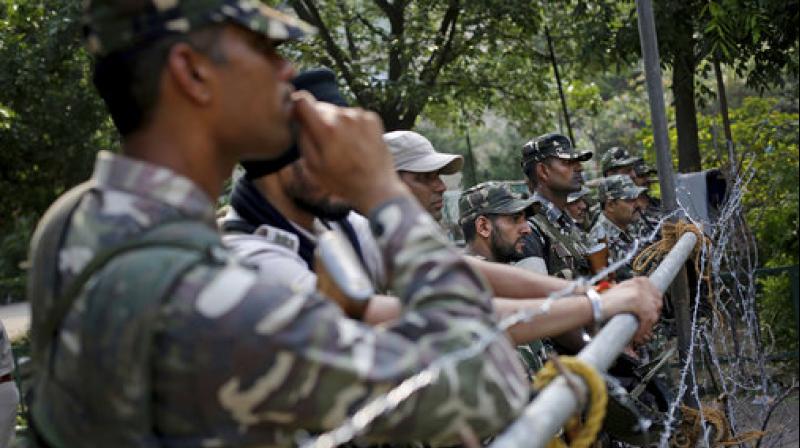 Chandigarh: Army columns moved into Panchkula early Friday as scores of Dera Sacha Sauda followers gathered in the town ahead of a court verdict in a rape case against the sect chief Gurmeet Ram Rahim Singh.

Singh left Sirsa by road for Panchkula to appear before a special CBI court in the sexual exploitation case against him.

The Haryana Police assisted by central forces was involved in an operation to flush out scores of Dera followers even as 50-year-old Singh made a video appeal to his followers to return home.

The Army was deployed in Panchkula early today, officials said.

The Army was called out at Panchkula and Sirsa as thousands of Dera followers had gathered and tension prevailed in the region.

"At the sect headquarters at Sirsa, police and paramilitary forces took out a flag march past midnight to enforce the curfew clamped at 10 PM (yesterday) for an indefinite period," Sirsa SP Ashwin Shenvi said.

The Dera followers made it to Panchkula over the past three days despite prohibitory orders under CrPC Section 144 being in force.

However, speaking to reporters in Panchkula late last night, a senior police official said that restrictions regarding carrying of weapons were earlier imposed under Section 144, which was later on amended and a provision invoked banning assembly of five or more persons.

Security forces were faced with a tough situation as many Dera followers remained reluctant to move, saying they had come to the town on their own and would move only after having sect head's "darshan".

The Dera followers could be seen occupying parks, roads and other available places like under the flyovers to pitch their tents.

However, authorities said that they had sealed the road leading to the district court complex and nobody was being allowed on that route.

Authorities used loud speakers to appeal to followers to move out of Panchkula.

The sexual exploitation case was registered against Dera chief in 2002 by the CBI on the directions of the Punjab and Haryana High Court after anonymous letters were circulated about the alleged sexual exploitation of two 'Sadhvis' (female followers) by Singh.

However, the sect head has denied these charges.