India   All India  25 Jul 2020  Coronavirus in India: Delhi may peak in a week, but the South has to wait for September
India, All India

Coronavirus in India: Delhi may peak in a week, but the South has to wait for September

There cannot be a uniform peak in COVID-19 cases in a large country like India, says expert. 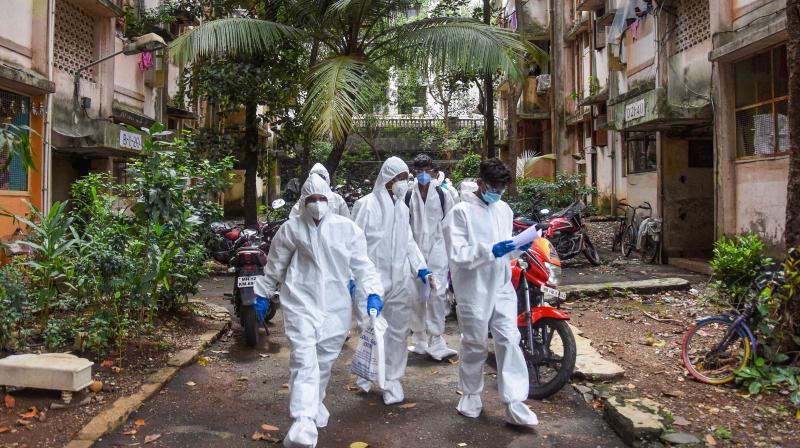 Mumbai: Health workers arrive to conduct door-to-door screening of residents of Dindoshi in the wake of coronavirus pandemic, at Goregaon East in Mumbai, Saturday. (PTI)

It has been four months to the day since India was put into lockdown to ward off the coronavirus. During the anxious days of Lockdown 1.0,the peak was promised in a few weeks, and then late May. But when the lockdown was eased in May, the only peaks in sight were the Himalayas from Saharanpur.

Where then are the peaks of COVID? In the last few weeks, talk of India soon approaching the COVID-19 peak have begun to be heard in murmurs.

First, it was Public Health Foundation of India president Dr K Srinath Reddy who said that coronavirus incidence could peak in mid-September in India but added that different states could witness different peak periods. Now, it is Prof GVS Murthy of the Indian Institute of Public Health who has reiterated Dr Reddy's message elaborately.

There cannot be a uniform peak in COVID-19 cases in a large country like India and each state has its own trajectory based on when people there were exposed to the infection, Murthy told PTI on Saturday.

Now, among the states and Union Territories, Delhi is predicted to peak by the end of July or early August. While Tamil Nadu, Karnataka, Telangana, Andhra Pradesh and Maharashtra – some of the worst-affected states in India  – are likely to witness the corona peak in September, which is in line with Dr Reddy's prediction.

Delhi to see an early peak

On Saturday, Delhi CM Arvind Kejriwal declared victory against the COVID-19 pandemic but said the battle is far from over. He said in the last one month, the number of coronavirus cases in Delhi has gone down,deaths have reduced, recovery rate has improved and positivity ratio has lowered.

There is truth to Kejriwal's statement. The number of coronavirus cases in June rose by 319 per cent but only by 48.27 per cent in the 25 days of July. Most likely, the growth rate will still be in two digits by the end of July, when Murthy predicts the city-state's corona cases will peak. The recovery rate, too, has improved from 66.79 per cent on June 30 to 87.29 per cent on July 25.

Thus, one may even infer that Delhi, aided by superior medical infrastructure and testing facilities, may already be in the peak stage and the coming few weeks could see a further reduction in the total number of cases.

But implicitly, Murthy may have also reinforced the notion that urban areas equipped with better infrastructure can ward off epidemics better than underdeveloped regions.

In states like Jharkhand, however, the peak may arise at a later time as the virus began to spread only after the return of guest workers from COVID-19 hubs like Mumbai and Delhi.

"In states like Jharkhand, Chhattisgarh and parts of Eastern Uttar Pradesh, the peak will take much longer. The peak would be somewhere towards the end of September or October for those states which had low reporting earlier," he said.

As noted in an earlier article, Bihar and Uttar Pradesh had very low rates of infection in comparison to their populations until April 30. That date holds a major significance in India's lockdown story because the Central government began running special trains to ferry guest workers from the next day. Consequently, the numbers of COVID-19 cases began to rise in these two states.

In terms of numbers, Bihar just had 425 confirmed cases of coronavirus on April 30. It now has 36,314 cases of coronavirus. Percentage-wise, this translates to a whopping 8,444 per cent rise in cases. Moreover, Bihar continues to lag behind in testing its population, with just 4.42 lakh tested so far.

Uttar Pradesh does not fare any better. The state has 63,742 confirmed cases of COVID-19. This figure was just 2,211 on April 30. So, there has been a 2,780 per cent rise in the total cases of coronavirus. Notably,eastern UP, economically backward and sending more migrants to West and South India, became the new cause for concern after the influx of guest workers. Varanasi, in eastern UP, is the third-biggest corona hub in UP after the Lucknow-Kanpur urban agglomeration.

Chhattisgarh is an interesting case. The state just had 40 cases on April 30 but now has nearly 7,000 cases – a massive spurt of over 17,000 per cent in less than three months. Interestingly, the state was being hailed for its effective lockdown before returning guest workers undid the gains.

"States like Telangana, Karnataka, Andhra Pradesh and Tamil Nadu should be able to achieve the maximum number of cases by mid-September," said Murthy, adding that these states are currently reporting high numbers but won't do so after mid-September.

Tamil Nadu may peak a bit quicker because it boiled up faster. The state with over 2 lakh confirmed cases of COVID-19 can witness its corona peak by the middle or the third week of August. However, the influx of guest workers made it worse for the southern state. Health minister C Vijaybaskar had blamed guest workers, especially those coming from Maharashtra, for the spurt in cases.

Maharashtra has also been held up as one of the contributors to the spurt in Karnataka. The latter state has nearly 91,000 cases but what is more worrying is the slipping recovery rate of patients. Karnataka now has a recovery rate of around 37 per cent, which is much lower than the national average of 63.54 per cent. Moreover, Karnataka's state of affairs is worth noting because just few weeks back, it was being hailed as a success story in contact tracing.

Already under the scanner for alleged under-reporting of cases and fatalities, Telangana has become one of the corona hubs since June. Since June 3, when the state crossed 3,000 cases, the total number of cases has risen by 1,637 per cent. In addition, the state has one of the lowest testing rates, with just 3,37,771 people tested so far.

With testing likely to go up after multiple criticisms of the state administration's handling of the pandemic, there are also chances of cases piling up. So, Telangana witnessing a September looks like a possibility.

Kerala, however, deserves special mention. "Kerala,you have seen now. They thought they had seen the end of COVID. Suddenly, inthe last over 10 days, Kerala has had a much larger number of cases than before," Murthy told PTI.

Kerala was being hailed as a model state even by the WHO, which said, “The state government’s prompt response to COVID-19 can be attributed to its experience and investment made in emergency preparedness and outbreak response in the past”. However, the relaxation of the lockdown and the return of Non-Resident Keralites contributed to the rise in cases.

That Kerala has recorded over 1,000 cases thrice in the last four days, is a reminder that the virus is not going away anytime soon.

In short, India has to brace for a long haul before the only peak in people’s minds will be the snow-clad Himalayan peaks.