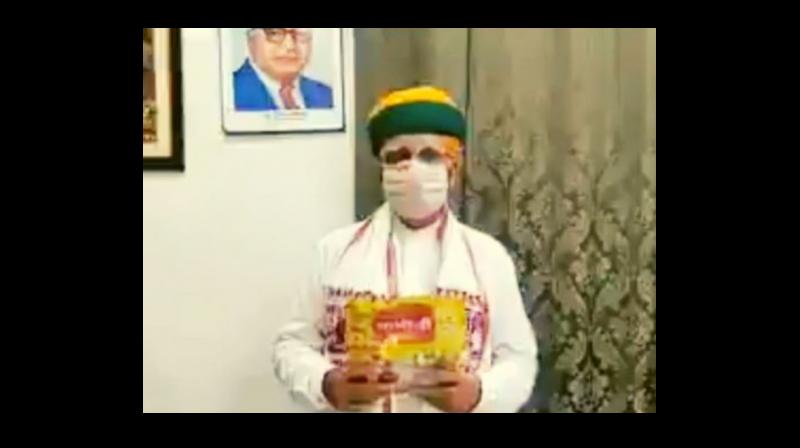 Arjun Ram Meghwal in the video.

New Delhi: A video of Union minister Arjun Ram Meghwal promoting a papad brand ‘Bhabiji papad’ and claiming that the papad is made from ingredients which help in building antibodies against COVID-19, went viral on the social media on Friday.

The video has some people criticizing the unscientific claims made by the Union minister while some pointed out the ayurvedic properties of some of the ingredients in the product to boost immunity.

In the video, the Minister of State for Parliamentary Affairs and Heavy industries and Public Enterprises is also seen wishing the brand’s owner Sunil Bhansali and wishing success to the product to promote the ‘Atmanirbhar Bharat’ initiative launched by the central government.

“Under the Atmanirbhar Bharat, Bhabhiji brand has come out with a papad which helps in developing antibodies, which will go into our bodies and help in fight against corona. Best wishes to the brand,” the minister, who is holding the papad packet and wearing a mask, is heard saying.

While the video was released by the minister’s official twitter handle but was circulating on the social media, Meghwal released a video on his twitter handle speaking about papads, bhujiya (snacks) and rasagulla from his parliamentary constituency Bikaner in Rajasthan.

He said how these snacks are popular and he urged people to only support only local products, as part of the “vocal for local” initiative. He also tagged news reports and tweets of party leaders promoting #VocalForLocal in other states and the GeM_India portal to promote local products from across the country by their manufacturers.