In April 2019, it had initiated the process to acquire 6 lethal submarines under the ambitious Project-75 India, to cost over Rs 50,000 cr. 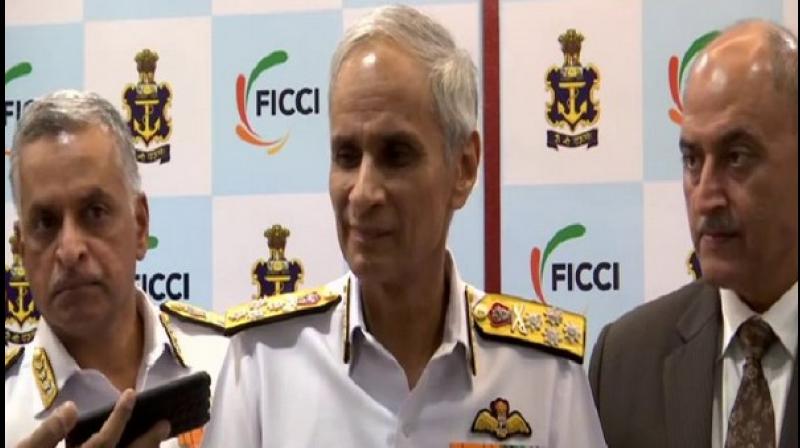 Navy Chief informed that by the end of 2019, India would be in position to sign a Rs 17,000 crore contract with US for buying 24 MH-60 Romeo multirole choppers. (Photo: ANI)

New Delhi: With the Chinese Navy expressing its intent to further expand itself into a global power, Indian Navy Chief Admiral Karambir Singh on Thursday said his Force is watching this carefully and will respond to it within the "budget and constraints" faced by it.

Speaking to reporters on the sidelines of a FICCI seminar on shipbuilding, the Navy Chief informed that by the end of the year, India would be in a position to sign a Rs 17,000 crore contract with the US for buying 24 MH-60 Romeo multirole choppers.

"It is not just the Chinese white paper but it has been said in the past before. A lot of resources have been shifted from other arms to the PLA Navy, obviously in-line with their intention to become a global power. We have to watch that carefully and see how we can respond within our budget and constraints we have," he said when asked about the Chinese Navy white paper issued on Wednesday.

The Chinese Navy in its white paper has made its intent to expand itself globally very clear and become a world power.

The Navy wants to deploy these multirole choppers on-board its warships and has tried to buy them through tenders twice but failed to do so. It has now decided to procure these choppers through government to government deal with the US for it.

Informing about the ongoing Navy Project-75 for the supply of six submarines, Singh said, "We have an expert committee with us, which is handling the entire 75 India project. This strategic partnership model is extremely important for us because this is one of the endeavours to build up the ecosystem in India."

"Through this, we are trying to get a good transfer of technology so that all our platforms become indigenous," he added.

Singh further apprised media here about the intrinsic requirements needed to build a strong Navy. "We require long term FISCAL support to build a Navy and that is my constant refrain and that's the only way we can plan if we have assured FISCAL support for long term."

The Navy Chief also said a few of the older submarines are undergoing a modification process also known as Medium Refit Life Certification process that will pull the working of these ships for a much longer duration.

In April 2019, the Indian Navy had initiated the process to acquire six lethal submarines under the ambitious Project-75 India likely to cost over Rs 50,000 crore.

The Navy initiated the tender process by issuing the initial Expression of Interest to foreign vendors willing to take part in the mega programme.

Under Project 75-India, the Navy wants to build six conventional diesel-electric submarines which would be almost 50 per cent bigger than the under-construction Scorpene-class submarines being built at the Mazagon Dockyards Limited in Mumbai.

While the Indian Navy has more than 100 submarines and surface warships, the Pakistani Navy has around 20 of these. However, the Indian Navy is building assets for tackling the Chinese Navy which operates occasionally in the IOR region.

On the issue of the third aircraft carrier required by the Indian Navy, Singh said the force wanted a third such warship to have three carriers at a time so that at all the times, two air carriers are operational.

The Navy wants a 65,000-tonne carrier with electronic propulsion and CATOBAR (Catapult Assisted Take-Off But Arrested Recovery) system onboard it.