‘Sushasan yatras’ by BJP to cover every UP LS seat

The focus of the yatras will be on the achievements of the Modi government and also the work done by the Yogi government since 2017. 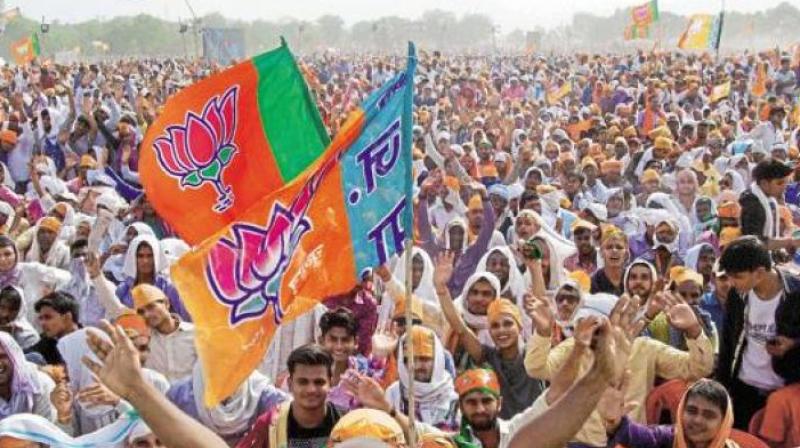 It may be recalled that in 2017, the BJP had taken out Parivartan yatras across the state.

Lucknow: The Bhartiya Janata Party (BJP) in Uttar Pradesh will take out “Sushasan Yatras” in Uttar Pradesh. These yatras will cover every Lok Sabha seat and will be dotted with rallies, seminars and meetings along the route.

The 50 rallies that Prime Minister Narendra Modi is scheduled to address in UP as a run-up to the general elections, will be supported by these yatras.

It may be recalled that in 2017, the BJP had taken out Parivartan yatras across the state. These yatras had been initiated from Saharanpur, Ballia Sonebhadra and Jhansi and had covered all parts of the state.

“At that time , we were calling for a change in Uttar Pradesh and the yatras were named ‘Parivartan Yatras’ but now that we have a BJP government at the centre and in state, the yatras will be named ‘Sushasan Yatras’ and through this we will mobilize our workers and voters across the state”, said a BJP functionary.

The focus of the yatras will be on the achievements of the Modi government and also the work done by the Yogi government since 2017.

According to sources, these yatras will now focus mainly on OBC and Dalit populated areas. The BJP has almost made up its mind that its ally Suheldev Bhartiya Samaj Party (SBSP) will no longer continue its alliance for the Lok Sabha elections. The SBSP has been in a belligerent mood since the past one year and its president and UP minister Om Prakash Rajbhar has not been sparing an opportunity to criticise the Yogi government. “SBSP may not continue its journey with us so we want to be prepared for the eventuality. We have our own leaders from the Rajbhar community,” the functionary said. PM Modi has already made it clear that the Lok Sabha elections in Uttar Pradesh will be contested under the present leadership in the government and the state.