Jagannath Sonavne, a protester who attempted suicide yesterday in Aurangabad's Deogaon Rangari, dies in a hospital. 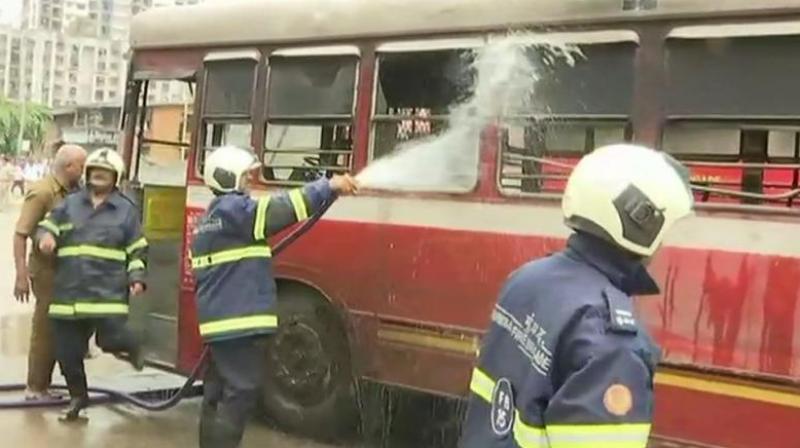 Agitators set a bus ablaze in Mankhurd during the protests. (Photo: Twitter | ANI)

Mumbai: Maratha Kranti Morcha which spearheaded the protests for reservation in government jobs and educational institutions for the community today called off their bandh in Mumbai.

Normal life was severely affected in Mumbai and adjoining areas after Maratha outfits called for Mumbai shutdown on Wednesday.

Though the outfit said that they would hold a peaceful protest, the agitations soon turned violent. The protesters set ablaze buses and vehicles at several places and blocked Pune-Mumbai highway.

Police resorted to tear gas to disperse the agitators.

Local train services were also disrupted at Jogeshwari and near Thane.

Fearing untoward incidents, most shops remained closed in and around Mumbai.

Elaborate security arrangements were put in place in the city ahead of the bandh.

Large-scale violence marred the protests by Maratha outfits demanding a quota for the community in Maharashtra on Tuesday, a day after the death of a protester.

Protester Kakasaheb Shinde (27) had jumped to death from a bridge over the Godavari in Aurangabad on Monday.

Stone-pelting and arson were reported from several parts of the state, which remained on edge on Tuesday.

Agitators clashed with the police and torched vehicles at several places, while Internet services were suspended in rural areas of Aurangabad district.

One constable died and nine other policemen were injured in stone-throwing on Tuesday when protesters clashed with the police and torching vehicles.

As the stir for reservation in jobs and education intensified, the Maratha Kranti Morcha, which is spearheading the agitation, has taken its battle to Mumbai where it has called for the shutdown.

Another outfit, the Sakal Maratha Samaj, called for a bandh today in Navi Mumbai and Panvel as well.

Quota for Marathas, a politically influential community that constitutes around 30 per cent of the state's population, has been a hugely contentious issue.

Here are the LIVE updates from Maharashtra Bandh today:

01:44 pm: Miscreants pelted stones and set a bus ablaze in Mankhurd during the protests. Fire has now been extinguished by fire tenders. 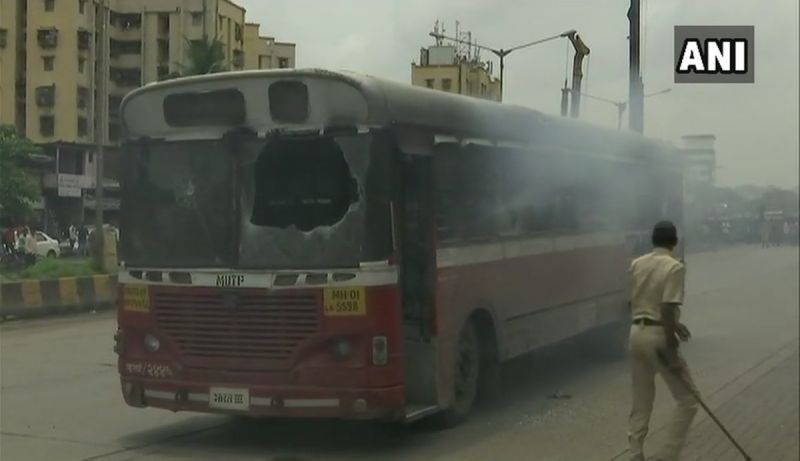 01:14 pm: “I support Maratha Reservation demand. I appeal to the protesters to protest peacefully. We need to make a law in parliament and raise reservation cap from 50 per cent to 75 per cent. I will also raise this issue in NDA,” Union Minister and Republican Party of India (RPI) leader Ramdas Athawale said. 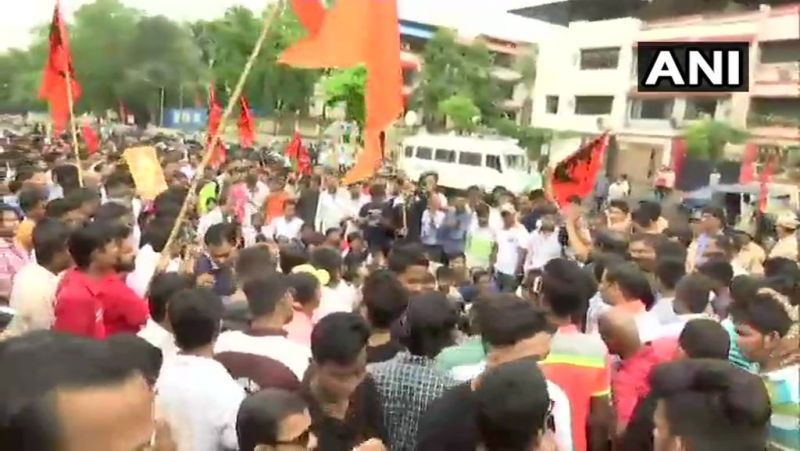 11:40 am: Local train routes have been blocked in Jogeshwari and near Thane.

11:14 am: There is no impact on railway services in Pune, all trains are plying normally, says Pune railway PRO.

10:37 am: Clashes broke out between two groups in Udgir in Latur district of Maharashtra when one group was forcibly trying to get people to shut shops and overturned a vegetable cart in an attempt to enforce Maharashtra bandh. Police are on the spot and situation is contained, news agency ANI reported. 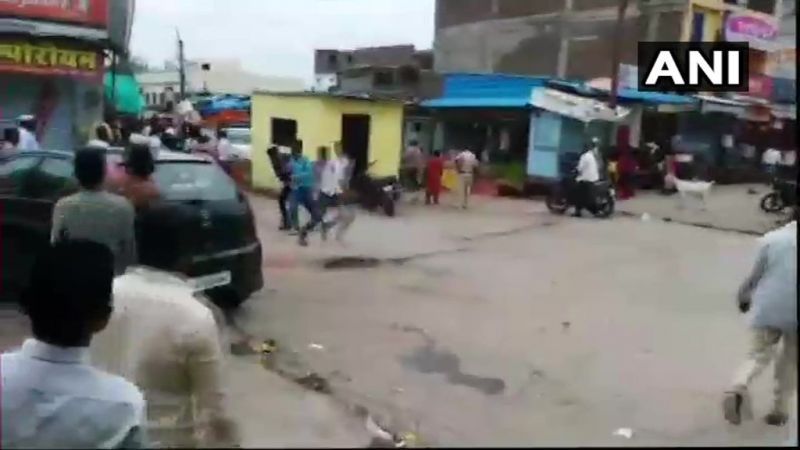 10:23 am: Workers of Maratha Kranti Morcha block a local train in Thane. 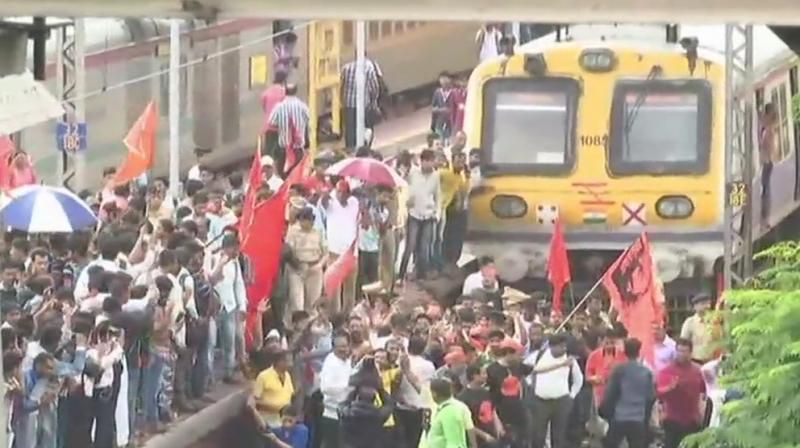 10:03 am: A group of Maratha Kranti Morcha workers request with folded hands, the shopkeepers in Bandra to shut their shops. 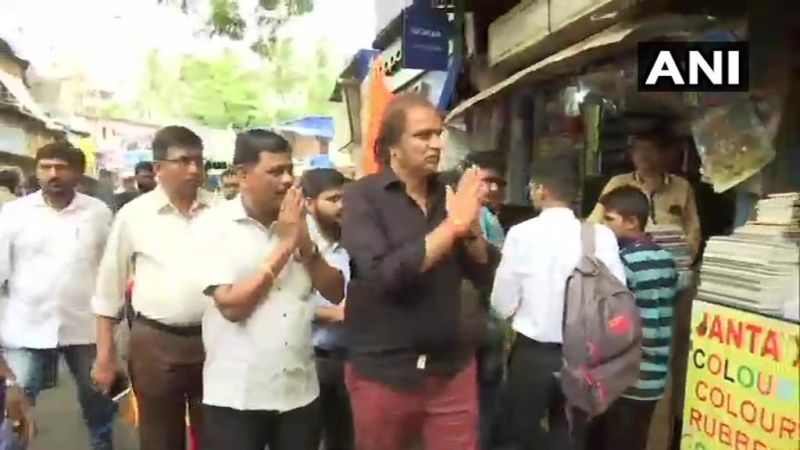 09:54 am: Jagannath Sonavne, a protester who attempted suicide yesterday in Aurangabad's Deogaon Rangari, dies in a hospital.

09:42 am: Tires were set ablaze on Majiwada bridge in Thane. 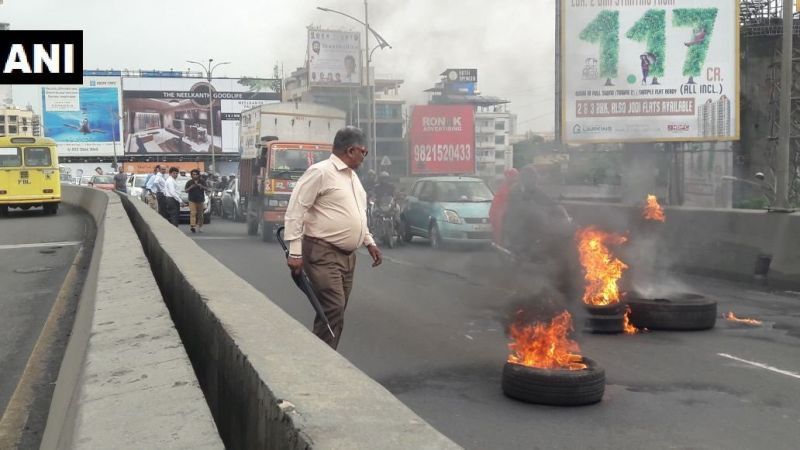 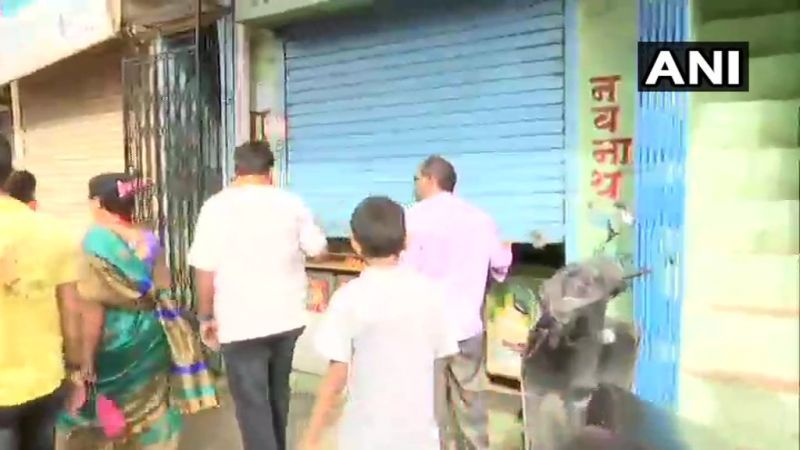 09:24 am: We are not blocking any road. We are carrying out a peaceful protest. We have told our workers that there should be no inconvenience to the police or government due to our protest. We are asking people to shut down their shops: Maratha Kranti Morcha. 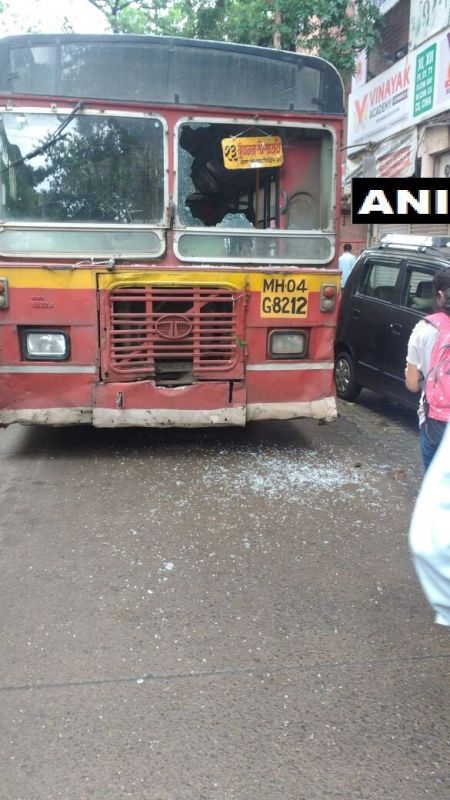 09:03 am: Police have been deployed outside the BJP office in Mumbai in wake of Maratha reservation protests. 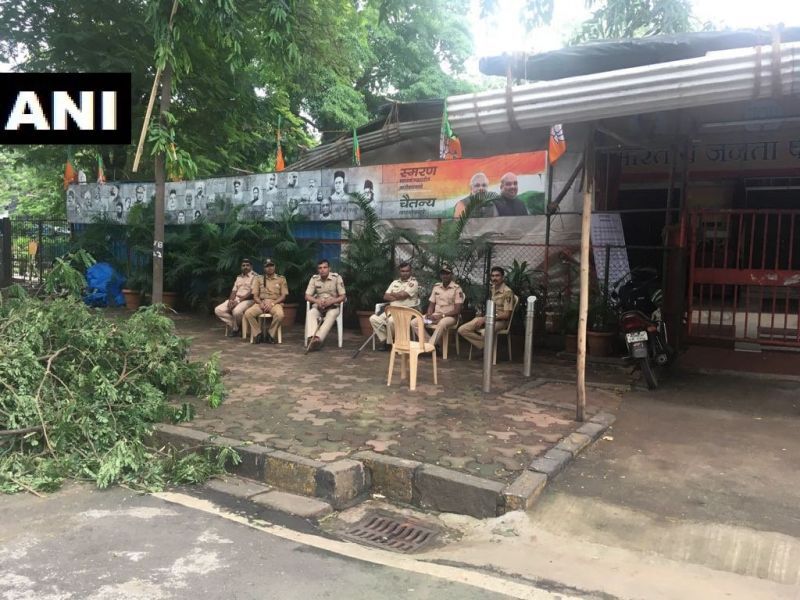 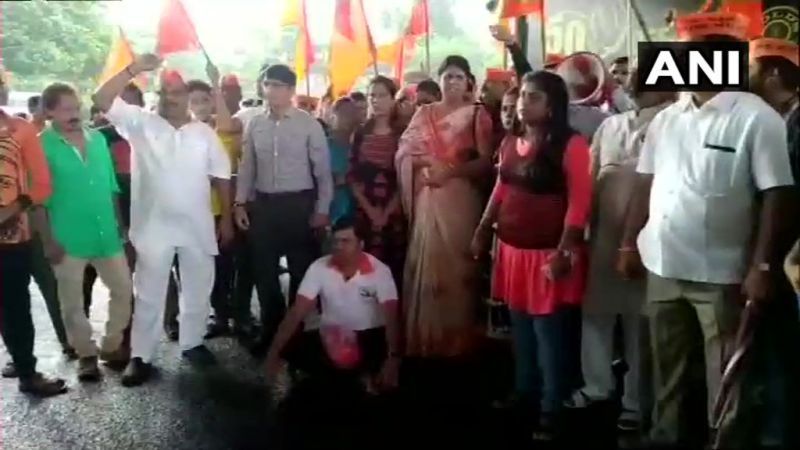 08:00 am: The train services are running as usual and security has been beefed up at several stations. Nearly 40 Railway Protection Force and Government Railway Police personnel were deployed at Dadar, CSMT and 20 at Kurla.

07:30 am: Visuals from parts of Mumbai as the strike called by Maratha Kranti Morcha enters the second day. Auto rickshaws were off the road in many areas of Navi Mumbai. 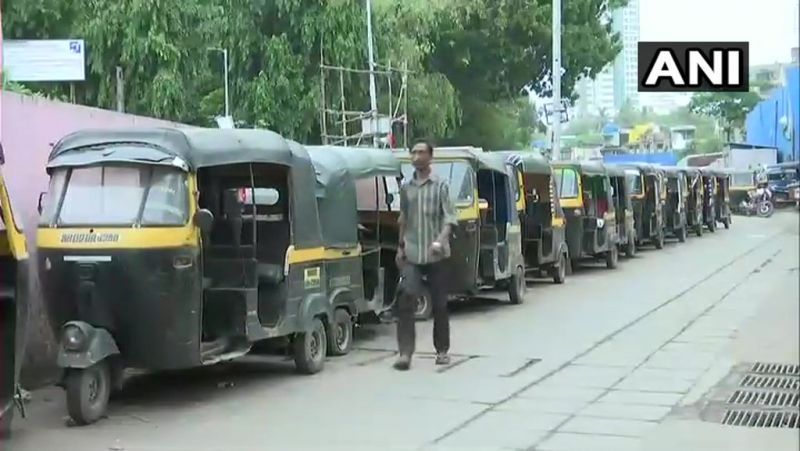 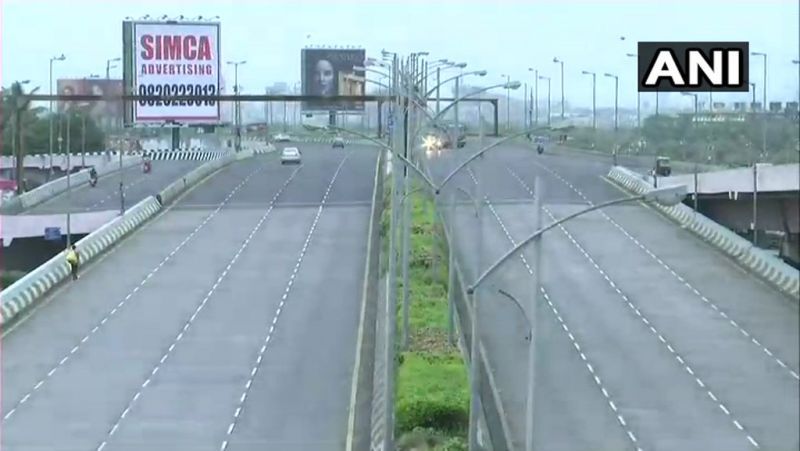 On Tuesday, protester Jagannath Sonawane, 31, from Aurangabad, sought to emulate Shinde's example by jumping onto a dry river bed, while another, Guddu Sonawane, also from the district, consumed poison. They have been admitted to a hospital, police said.

In Thane, activist Mangesh Suryavanshi (38) jumped into a creek near the Ganesh Ghat, but was saved by police and others, Thane Police PRO Sukhada Narkar said. He received minor injuries and was admitted to a hospital.