Lord Ayyappa deity in Sabarimala is celibate and does not want presence of women between 10-50 years, lawyer said. 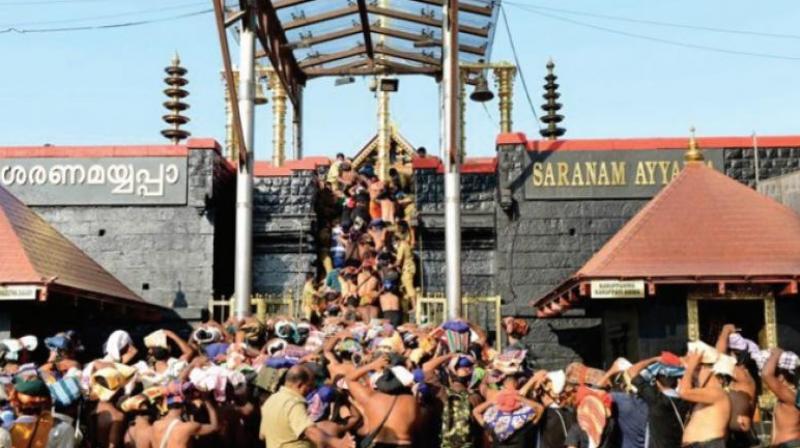 Advocate Parasaran, appearing for Nair Society, one of the intervenors, said Sabarimala was a unique temple where other than Hindus, Christians, Muslims and even foreigners are allowed entry. (Photo: sabarimala.kerala.gov.in)

New Delhi: As per the custom and long tradition, women in the age group of 10 to 50 are not allowed as manifestation of God in the Ayyappa temple at Sabarimala is a celibate and the deity does not want the presence of women in this age group, argued senior advocate K Parasaran in the Supreme Court on Wednesday.

Parasaran made this submission before a Constitution Bench of Chief Justice Dipak Misra and Justices Rohinton Nariman, AM Kanwilkar, DY Chandrachud and Indu Malhotra hearing a batch of petitions challenging the ban on entry of women in the age group of 10 to 50 in this temple.

Parasaran, appearing for Nair Society, one of the intervenors, said Sabarimala was a unique temple where other than Hindus, Christians, Muslims and even foreigners are allowed entry. But as per the custom and long tradition, women in the age of 10 to 50 are not allowed, as manifestation of God in this temple is a celibate.

He submitted that if the court were to abolish the practice, the very character of the religious institution will be irreparably altered which affects the rights of devotees under Article 25(1).

He submitted that the present case does not involve a social issue but a religious issue. By using 25(2), “your Lordship will reform a religion out of its identity” he cautioned the court.

Parasaran said not only the perception of the worshipper but also what is being worshipped is also important. If a devotee feels that he is not worshipping the idol of a Brahmachari, he may not go to that temple.

In all other Ayyappa temples in Kerala women are allowed entry without any discrimination.

He said the concept is the presence of women in the age of 10 and 50 will disturb the penance of the Lord Ayyappa and hence the Lord himself does not want their presence.

Parasaran said that Lord Ayyappa's character as a Naishtika Brahmachari is protected by the Constitution and judiciary can’t interfere with it.

Referring to the observation made by Justice Chandrachud on Tuesday and the ban of women is due to the patriarchal system, Parasaran submitted that 96 per cent of the women in Kerala are educated and it is a matrilineal society. Therefore to assume that the practice of the Sabarimala Temple is based on patriarchy is fundamentally incorrect.

Parasaran submitted that the basis of the practice is the celibate nature of the Deity, not misogyny. Devotees who visit the temple too are expected to observe celibacy in letter and spirit. Hence, during the journey, company of women must be avoided.

He argued that misogyny is not supported by Hindu Shastras nor is chastity the sole obligation of the woman. In fact, chastity is a greater obligation on the man and he is duty bound under the Shastras to give a pride of place to the woman.

Parasaran submitted that democracies must protect religion and tradition. He said that Hindu religion respects merit and wisdom wherever it comes from. He was of the view that while the court must listen to activist voices, it must equally listen to voices which seek to protect tradition

Parasaran submitted that the Legislature is Brahma, Executive is Vishnu and Shiva is judiciary because only Shiva's ‘ardhanarishwara’ form edifies Article 14, equal treatment of both sexes.

He said that Shiva is no Brahmachari, but even when his meditative state was sought to be disturbed by Kama Deva, he was reduced to ash because he failed to respect that state of Shiva.

Cautioning the courts, the former Attorney General said “we must not proceed with the presumption that the ancients knew nothing and that we know better in all aspects of life.”

Justices Nariman and Chandrachud wanted to know whether the State is bound to make laws under Article 25 (2) (b) of the Constitution to throw open Hindu temples to all classes of people including women without any age restriction.

Parasaran said this right of State applies only to social reform, it still does not apply to matters of religion under by Article 26 (b). When the CJI asked the counsel as to why women are excluded, counsel said it was being done as per the religious practice and custom followed for years.

Parasaran submitted that Article 25(2) deals only with secular aspects and right of entry of classes or sections. It does not therefore apply to religious aspects or right of entry based on gender

He said that even if Article 25(2) applies to women, it is only with respect to social issues but not religious issues. He further submitted that Article 25(2)(b) is at best an enabling provision for the Legislature, it doesn't enable the judiciary to interfere with custom, which is an integral religious practice.

When Justice Nariman pointed out that the notification restricting the entry of women of a particular age will violate the fundamental rights, Parasaran points out that the said provision requires the Tavancore Board to observe and maintain the practices of Temples under its administration. Arguments will continue on Thursday.