Each toilet has a tap inside as well as outside and a hand pump that cranks water into a tank for the toilet. 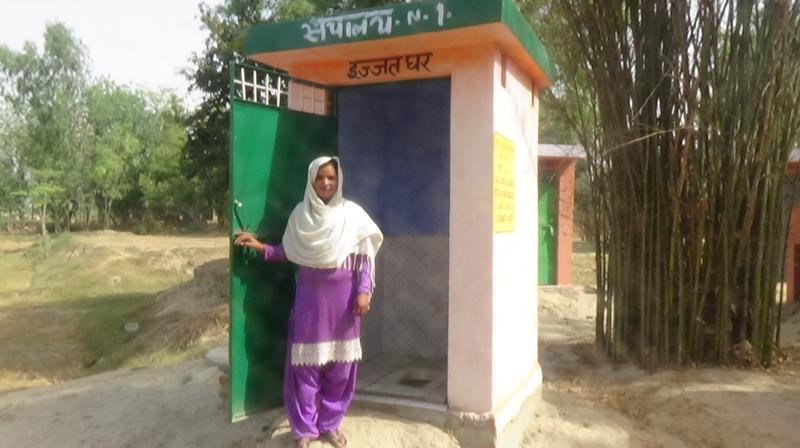 The last to construct a toilet at Kamli was Husna, who was extremely poor. The community helped her with construction, and today it is as good as any in the village.

Kamli village, gram panchayat Alyabulbul of Bahraich district is home to those living on the margins — migrants, local labour and farmers — and with plenty of open space all around, going into the fields for defecation was the norm. No one questioned it or looked down on those who went into the fields. But there has been a complete transformation on the sanitation front in a span of a year or two. Each of the 67 households of the village has an Izzat Ghar or a twin leach pit toilet.

Yes, these toilet facilities with bright blue and green doors have given this down trodden village of 334 people and its women in particular izzat or respect. The izzat ghar concept for toilets was started in Bijnore, but today across most areas of UP, which have toilets they are called izzat ghars.

Mosquitoes added to the woes of the village. In Samsatarhar, though there were 118 toilets, 75 of them were used to store fodder. Arun Singh Chavan and Nafis Ahmed Siddique, Pradhan and member of the Village Water and Sanitation Committee respectively, maintain when you approach people as a group it is easier to change the public mind.

It was this collective effort that made both villages ODF (open defecation free). The first to be won over was 60 year old Budra Ram of Risyajamal village, who was doling out Rs 6,000 to 7,000 every second month to doctors for ailments of his six member family. He was the first to construct a toilet in his village and found that his medical expenses were substantially reduced.

He was made a para worker of AKF and got an incentive of Rs 10 for each household that he motivated for an izzat ghar. For each toilet constructed and used he received Rs 150.

Budra Ram went from house to house talking about sanitation — protecting food from flies and insects by covering it, keeping ditches dry and if possible covered and of doing away with plastics. Each household took responsibility of keep clean the area around it. The cherry on the cake was the toilet.

The state government provided Rs 12,000 per toilet and this was transferred to the gram panchayat fordistribution to the households. Many people put in an additional Rs 10,000 seeing it as asset.

Each toilet has a tap inside as well as outside and a hand pump that cranks water into a tank for the toilet.

At Kamli village, Kitab Ali was the first to construct an izzat ghar in September 2017. Both men and women maintain the toilets. While men just dunk water for cleaning, women clean it with Harpic.

The toilets in the primary and an upper school have also been renovated and provided with impr-oved water facilities so that they are in sync with the clean villages. Pradhan Chavan said even the youth groups of the village were involved in the total sanitation campaign. Coming from technical colleges, they tested water sources for purity. Two hand pumps dispensing impure water had to be closed after their report came out.

With the toilets being clean and right next to the homes, people are happy to use them. The few who were reluctant to use the izzat ghars were cajoled and motivated to use them. For a whole month, a group of women and young men patrolled the village at night and early morning to ensure that no one defecated in the open.

On an early morning vigil, a clerk in a government department was so enraged when disturbed defecating that he charged the vigilance group with an axe. A complaint was made to the District Magistrate and the clerk reprimanded.

As a collective, the committee in-charge of sanitation at Kamli, decided to fine Rs 300 to those defecating in the open and reward those reporting a case Rs 100.

“We are determined to keep Kamli clean and there will be no slipping back to old ways” is the assurance given. If people from adjoining villages are caught defecating in their village, the nigrani (watch) committee tells them to go back to their own villages and shames them.

At Samsatarhar, the fine for open defecation is Rs 500 and the reward Rs 100 for reporting a case.

The last to construct a toilet at Kamli was Husna, who was extremely poor. The community helped her with construction, and today it is as good as any in the village. The heavy iron doors of the izzat ghar are painted regularly to prevent them from rusting.

Last year, there was an epidemic of chicken pox in the village. But this year, because of the cleaner environment, there has not been a single case. Households have been asked to construct raised, cemented platforms arou-nd hand pumps so that the underground water is not polluted. Water channels are being constructed near hand pumps to drain out surplus water into fields.

On World Water Day, March 22 this year, Samsatarhar declared it was open defecation free and took out “a walk for pride”.

Now Kamli and Samsatarhar want improved water supply for the villages. They want taps in their homes and proper drainage facilities. The government is planning solid and liquid waste management of ODF villages. Tricycle collection of garbage and segregation before disposal is also proposed. AKF is working on converting the ODF free villages into model villages!