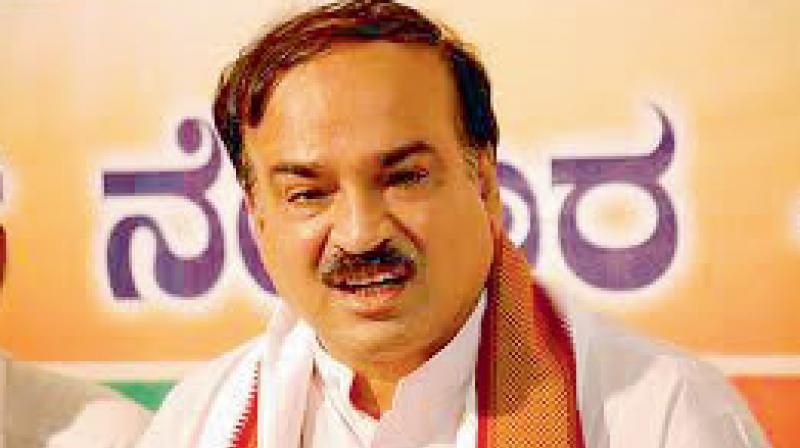 New Delhi: Parliamentary affairs minister Ananth Kumar attacked the Congress top brass, including its president Sonia Gandhi, for not stopping party members from throwing papers towards the Chair in Lok Sabha and termed it a “black day” for Indian democracy. Lok Sabha Speaker Sumitra Mahajan said she was “deeply hurt” over the conduct of Congress MPs.

Shortly after she suspended six Congress MPs from the House for their “highly unbecoming” conduct, Ms Mahajan, outside the House, said, “I am sad and deeply hurt ... And unable to understand why this happened, as I did not prevent them from raising any issue. I told them they can raise the issues they want but only after the Question Hour.”

Wondering what prompted the Congress to act in such a way, Mr Kumar alleged the Congress top brass, including Mrs Gandhi and Mr Mallikarjun Kharge, remained in their seats while their party’s members created a ruckus in the Well of the House and did not try to stop them.

“It is painful that she did nothing... It was a black day in the history of Indian democracy,” he said outside Parliament.  “What they did was “unpardonable”, he added.

Congress member and one of the suspended MPs, Adhir Ranjan Chaudhary, said, “Backward class and minorities are currently scared of lynching. We are fighting for the people even Prime Minister Narendra Modi also said that the government is not with the fake Gaurakshak (cow protector)...”