He was arrested from Coimbatore in Tamil Nadu on June 20 and is presently lodged in the Presidency Correctional Home in Kolkata. 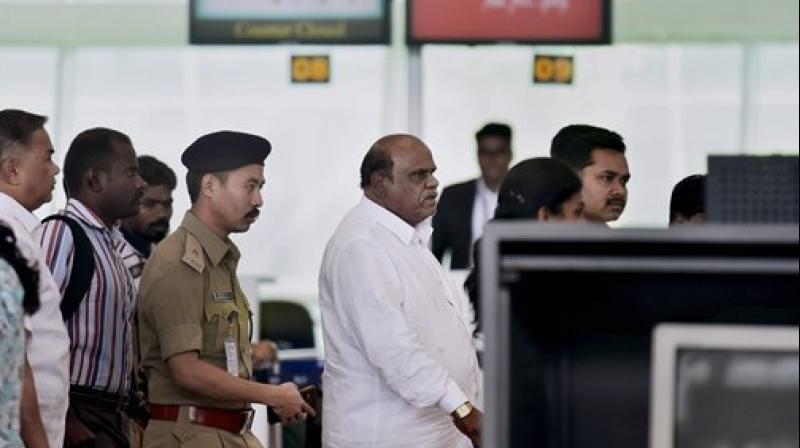 Karnan was given the six months by the Supreme Court for contempt for allegedly degrading the judicial institution.

In January 2017 Justice Karnan named 20 sitting and retired Supreme Court and high court judges of being corrupt. He released the list in an open letter addressed to the prime minister.

Following his continuous allegations against the Madras high court, Chief Justice and other judges, the Supreme Court had on February 8 initiated contempt proceedings against him.

Karnan's lawyer Mathews J Nedumpara was quoted in reports earlier on Tuesday that they would make the "first petition submitted physically and electronically" to the new President "within minutes" of his swearing-in.

Ram Nath Kovind took oath as the 14th President of India on Tuesday.

Karnan's lawyer also said the final draft of the petition to the new President was prepared on Monday.

Karnan was arrested by the Kolkata police in Coimbatore, Tamil Nadu on June 20 and brought to the national capital.

As per reports, the Calcutta High Court judge, who was absconding since May 9, was brought to Kolkata on transit remand.

On June 7, the Supreme Court had refused to grant relief to Justice Karnan in the contempt of court case where he was sentenced to six months in jail.

The apex court on May 19 rejected Justice Karnan's plea for recall of the six-month jail term, stating the petition was "not maintainable" in court.

In June, Justice Karnan had approached the apex court seeking recall of the May 9 order, in which he was convicted and was sentenced to six-month imprisonment.

The top court had taken suo-motu cognizance of numerous letters written by him against judges of the Madras High Court and the apex court and restrained him from exercising administrative and judicial powers from February 8.

Karnan is the first ever sitting judge of a higher court in judicial history to be sentenced to jail.