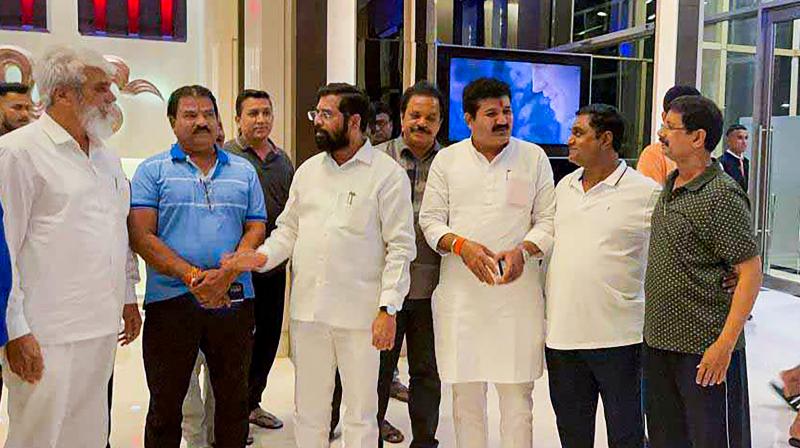 Mumbai: Dissident Shiv Sena leader Eknath Shinde on Saturday alleged that the Maharashtra government has withdrawn the security cover provided at the residences of 16 rebel legislators, including himself, and dubbed the action as "political vendetta".

Shinde, who is currently camping in Guwahati with the rebel legislators, tweeted a letter signed by the 16 MLAs that is addressed to Chief Minister Uddhav Thackeray and Home Minister Dilip Walse Patil.

In the letter, the legislators said CM Thackeray and the leaders of the ruling Maha Vikas Aghadi (MVA) alliance will be responsible if any harm is caused to their family members.

In his tweet, Shinde alleged that the security cover of the 16 rebel Sena legislators was withdrawn on the orders of Thackeray and Walse Patil due to "political vendetta".

"The government is responsible for the security of these legislators," he added.

In the letter, the legislators demanded that their security cover be reinstated.

"If our family members are harmed, then the chief minister, leaders of the Maha Vikas Aghadi (MVA) government like Sharad Pawar, Sanjay Raut and Aaditya Thackeray will be responsible," the letter said.

The security cover, which is provided at their residence as well as to their family members as per the protocol, has been withdrawn illegally and unlawfully as an act of revenge, it said.

The MVA government has been facing a crisis of survival after a majority of Sena MLAs shifted their loyalty to Shinde and are camping in Guwahati.