'If Muslims want to lie in gutter let them be': PM quotes Rajiv's minister in LS

He made these remarks while referring to a law brought by the then Cong govt to overrule the Supreme Court judgement on the Shah Bano case. 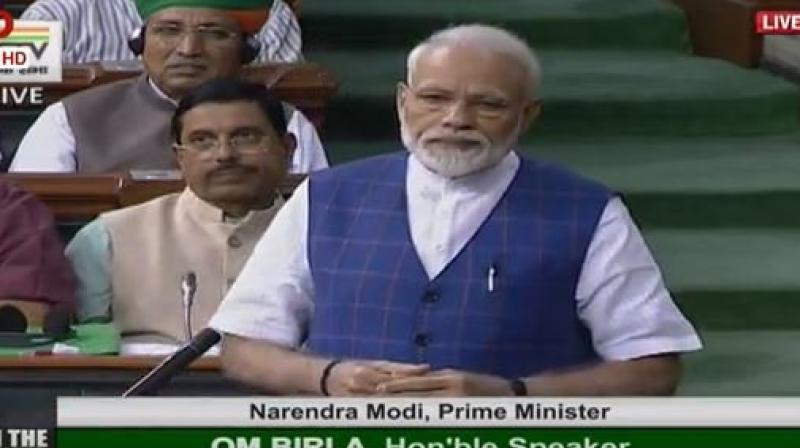 He made these remarks while referring to a law brought by the then Cong govt to overrule the SC judgement on the Shah Bano case. (Photo: ANI | Twitter)

New Delhi: Prime Minister Narendra Modi Tuesday asked the Congress to "not miss" another opportunity to empower Muslim women and sought the opposition party's support for the bill on triple talaq.

Replying to the Motion of Thanks to the President's address, Modi quoted a former minister in the Rajiv Gandhi-led Congress government as saying in an interview that its leaders claimed that it was not the duty of their party to uplift Muslims and "if they want to lie in gutter let them be".

He made these remarks while referring to a law brought by the then Congress government to overrule the Supreme Court judgement on the Shah Bano case to placate Muslims.

When his remarks drew a sharp reaction from the Congress, the Prime Minister said he could share the YouTube link of the interview. He said the Congress has missed many chances to empower Muslim women and has got one more oppurtunity.

Modi said this in reference to the triple talaq bill introduced in the Lok Sabha by the government. The bill had lapsed as it could not be passed by Parliament during the tenure of the 16th Lok Sabha. It had faced stiff resistance from the opposition including the Congress for allegedly being against fundamental rights.