India   All India  25 Jun 2019  Madras HC allows Nalini to argue for her leave in person
India, All India

Madras HC allows Nalini to argue for her leave in person

Nalini was sentenced to death which was commuted to life imprisonment by the AIADMK government in 2000. 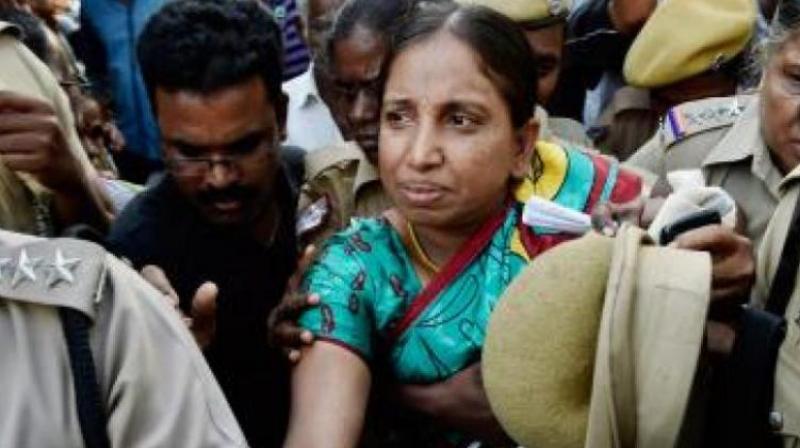 On June 11, the court observed that Nalini’s right to appear in person to argue on her plea cannot be denied. (Photo: File)

Chennai: Madras High Court has allowed Nalini Sriharan, a life convict in Rajiv Gandhi assassination case, to argue in person for her petition seeking leave for six months to make arrangements for her daughter’s wedding.

Her petition will be heard by the bench of Justices M M Sundaresh and M Nirmal Kumar on July 5.

Nalini had requested the prison authorities in February that she had not availed the leave of one month granted to every inmate every two years. After her representation was not considered, she moved the high court.

On June 11, the court observed that Nalini’s right to appear in person to argue on her plea cannot be denied.

Nalini was sentenced to death which was commuted to life imprisonment by the AIADMK government in 2000.

Nalini claimed that around 3,700 life convicts, who had served 10 years of imprisonment or less, were released by the Tamil Nadu government after her death sentence was commuted.

“My request to the state for premature release under the 1994 scheme of premature release of life convicts was cleared by the council of ministers and on September 9, 2018, the council advised the governor to release me and other six life convicts in the case. But it has been over six months and the decision of the state is still yet to be implemented,” The Indian Express quoted Nalini.

CM K Palaniswami had reiterated his commitment to the release of the convicts and hoped that Governor would act on the cabinet recommendation to set them free.

After the Supreme Court dismissed the plea of relatives of the convicted opposing their release, the Opposition demanded the release of the convicts.