There is not even a single tourist place in India that has not either been vandalised or polluted by people. 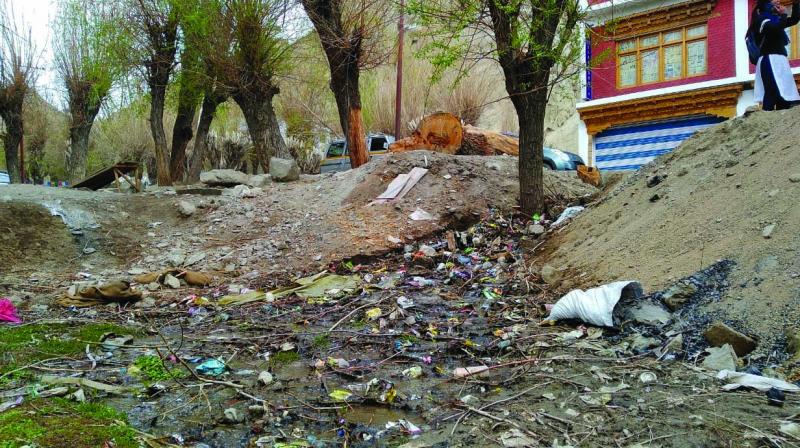 Garbage litters a previously pristine environment around Leh in Jammu and Kashmir.

Leh is a beautiful place with a population of 1.47 lakh people, situated at 11,500 feet above sea level in the northern part of the state of Jammu and Kashmir. It is a dry, cold desert which thrives on tourism, but with rising levels of tourism and modernisation come various issues. In 2017, there were 70,000 tourists in Leh, and by 2018, it increased to 3 lakhs.

There is not even a single tourist place in India that has not either been vandalised or polluted by people. Places that are not so famous are clean while the well-known tourist destinations are as polluted as any other metropolitan city.

Tourism in Leh is at peak currently and so is the pollution of land, air and water. Flying chips packets, empty water bottles, poly covers are now becoming a common sight on both the roads leading to this paradise. More people are eventually resulting in ruining the beauty of Ladakh. We do not think before throwing a water bottle out of a moving car or throwing an empty packet up in the air.

Marziya Bano (name changed) from Choskore said, “Thirty years ago, the population of Leh was only 5,000. With the large increase in population, littering and garbage has increased manifold. Leh does not have the capacity to sustain this.”

The problem of garbage is increasing in the small city of Leh every year. The increase in tourism is contributing to this heavily. Despite having separate dustbins for segregation of waste, there is apathy and a lack of awareness from both tourists and locals, leading to bad waste management. There is also a lack of an appropriate infrastructure since the municipal tipper trucks that collect the segregated waste mix the contents.

Another issue is that in Leh, most products need to be brought from outside of Ladakh. As people live more modern and affluent lives, they are moving away from traditional food and practices, increasing the use of packaged products. Their unplanned disposal is also a huge cause for concern.

During peak tourist season, Leh city collects 16 to 18 tonnes of waste per day, and annual waste production stands at an alarming 374 tonnes.

Neha, a visitor from Goa, says, “Garbage is generated due to a lack of knowledge — people are unaware of the many problems it causes. We can find a solution by making people aware and educated.”

Ishay Angmo from Martsaylang village says, “I think it is all the individuals whose mindsets need to be changed towards using local products. Even if people use packaged products, they should be used in limited quantities. So I guess everyone is responsible.” Vinod, a frequent visitor from Goa, says, “Leh is located in the middle of a very sensitive region. If the garbage problem is not solved, it will affect not just the people but also the ecology of the region.”

People want access to the products that come with development but the access to them has preceded responsible systems for managing the externalities of the products. It is up to every individual to develop systems of management, including tourists, local people and the government.

“About 65,000 kg of waste was first collected from the Choglamsar, Nubra, Nimo and Khaltsi areas this year. While 27,000 kg of waste was sold to scrap dealers, 17,000 kg of cardboard, egg trays and other agricultural waste was reused for recyclable products like biofuel and bricks. Paper and cloth waste were used for making decorative items,” deputy commissioner of Leh, Avny Lavasa told the Hindu in an interview on Christmas Day in 2018.

Project Tsang-da, initiated by the district administration in 2018, aims at sustainable waste management in rural areas of Leh district and city. “For the first time, the project turned waste into revenue-generating goods, such as curtains, toys and cushion covers. Wine or beer bottles and other broken glasses were also reused in the construction of roads and buildings by local construction companies,” said Ms Lavasa while speaking to the Hindu.

One of the ways to educate people is by having garbage collection drives and showing people where the garbage ends up. Some groups are experimenting to find sustainable solutions to the problem — for example, SECMOL uses a “rocket stove” which can burn various types of garbage and use the heat for cooking, while filtering out harmful fumes. Despite these efforts, all stakeholders need to work towards coordinated and sustainable initiatives to manage the growing menace of waste in Leh.