'Do those who don't say Vande Mataram have right to live in India?’ Asks BJP MP 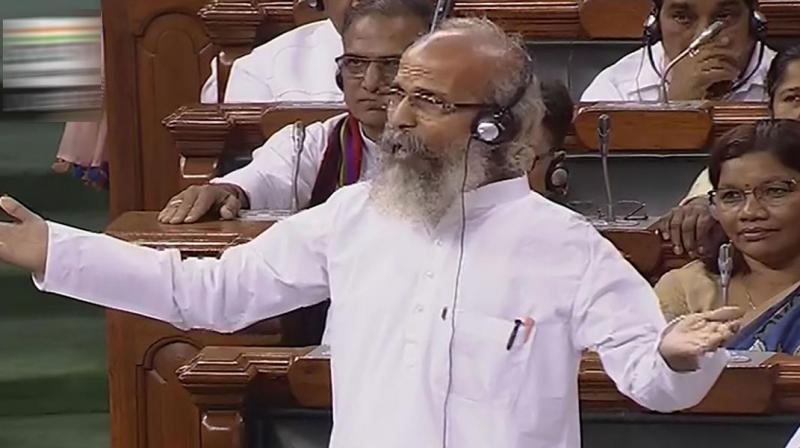 Sarangi is known for his pro-Hindutva view and has been charged for rioting, arson and assault after the Odisha Assembly was attacked by right-wing groups in 2002. (Photo: PTI)

New Delhi: Minister of State for MSME and Animal Husbandry and a first-time MP from Balasore in Odisha Pratap Chandra Sarangi, on Monday, asked whether those who refused to say “Vande Mataram” had a right to live in the country.

In an apparent dig at the opposition, he said, “What is the religion of tukde tukde gang?” he asked. “People who say ‘Bharat ke tukde tukde karne tak jung rahegi’, and ‘Pakistan zindabad, Afzal Guru zindabad’, do they have the right to live in this country? Who supports these people? Introspect now,”.

The fellow BJP legislators replied by thumping the tables and said: ''No, not at all''.

Sarangi's remark came a day after Samajwadi Party MP Shafiqur Rahman Barq refused to say ''Vande Mataram'' last week during the oath-taking ceremony. Barq said that it was ''against Islam''.

Sarangi, who is also known as the ''Modi of Odisha'' was fielded by the NDA to initiate the motion of thanks to President Ram Nath Kovind’s address to the joint session of Parliament.

Sarangi said that BJP had won the support of all sections of people and government was being run because of their involvement, while he slammed Opposition for being ''corrupt''. He said 10 years of the Congress-led United Progressive Alliance (UPA) government was “misrule and full of corruption”.

Sarangi is known for his pro-Hindutva view and has been charged for rioting, arson and assault after the Odisha Assembly was attacked by right-wing groups in 2002.