The groom took no dowry from his in-laws other than tree saplings. 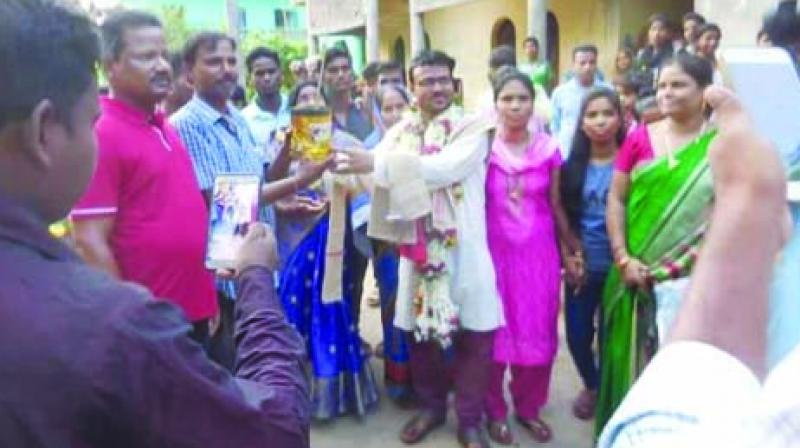 Kendrapara: Setting examples for others, a youth hailing from Odisha’s Kendrapara district married girl without any dowry. He only received some tree saplings from in-laws as “precious gifts.”

The groom Saroj Biswal, a science teacher at Chaudakulat High School, did not ride any luxury car nor a horse to the bride’s place. He walked for 2.5 km to the wedding venue without any band and baaja, — he had only a disciplined baaraat that included teachers, social workers, village elders and children. Mr Biswal married to , the youngest daughter of Maheswar Paital, a resident of Adampur village in Marshaghai area without spending money on marriage procession.

The bride is a Sanskrit teacher posted at Nischintakoili High School in Cuttack district.

The groom’s family, while dismissing dowry options, had made only one demand; - 1500 saplings of fruit bearing trees as gifts. They distributed two saplings to each house in the bride’s village to make the wedding memorable.

The groom’s reception took place on Sunday evening at his village where the invited guests were presented the remaining saplings as “gift” from their side.

In the invitation card, the groom’s family mentioned that there will be no use of plastic items during the reception.

“Wedding aims at giving a message to the society that is filled in evils like dowry and unnecessary expenses in name of marriage,” said Saroj’s uncle Sudarshan Biswal.

“I am happy that my daughter married such a person, who directly denied to take dowry,” said bride’s father Maheswar Paital.