The JD(U) had emerged as the second largest party with 71 seats during the 2015 Assembly elections. 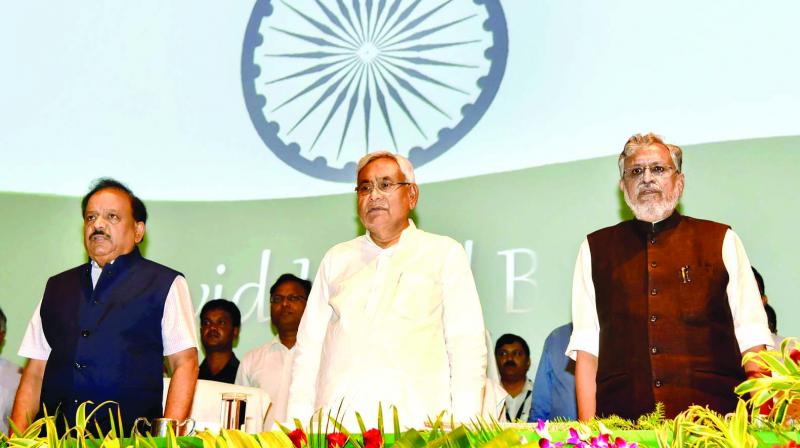 Patna: The simmering tension over seat-sharing between NDA allies JD(U) and BJP resurfaced on Sunday when some JD(U) leaders looked eager for an early decision on the issue.

A JD(U) source said that the party wants the BJP to consider the performance of 2015 Assembly elections while taking decisions on seat-sharing for 2019 general elections.

The JD(U) had emerged as the second largest party with 71 seats during the 2015 Assembly elections.

JD(U) insiders claim that the party is likely to include the issue of seat-sharing in its agenda for the forthcoming national executive meeting scheduled to be held in New Delhi on July 8.

However, the BJP on Sunday reacted strongly on the issue and called JD(U)’s demand as “unrealistic” and a tactic to put the BJP and other NDA allies under pressure ahead of the 2019 general elections.

BJP MLA Nitin Navin told this newspaper that, “The decision will be taken at an appropriate time but by making such demands JD(U) is only trying to put pressure on its allies in Bihar. The JD(U) benefited in 2015 by contesting the Assembly elections in alliance with Lalu Yadav’s party RJD.”

BJP leaders claim that “distribution of seats for the 2019 Lok Sabha elections will be done on the basis of fresh formula and 2014 performance is likely to be considered.”

In the 2014 general elections, the RLSP had won all three seats in Bihar. Ram Vilas Paswan-led LJP had won six out of seven seats and the BJP had won 22 out of 30 seats it contested in the last Lok Sabha elections in Bihar.

The JD(U), which had contested separately in the 2014 Lok Sabha elections, was reduced to winning just two out of 40 seats. The party returned to NDA fold in July 2017 and has been eyeing a larger share of seats in Bihar.D(U) spokesperson Ajay Alok had created a flutter earlier this month by demanding to contest on the formula decided by JD(U)-BJP during the 2009 general elections.

According to sources, the issue is likely to be discussed during a meeting which will be chaired by BJP president Amit Shah in July. Amit Shah is expected to visit Patna and is also likely to hold a one-on-one meeting with Bihar chief minister Nitish Kumar next month.