As of now, Amphotericin-B, an anti-fungal drug is being used for the treatment of the black fungus disease 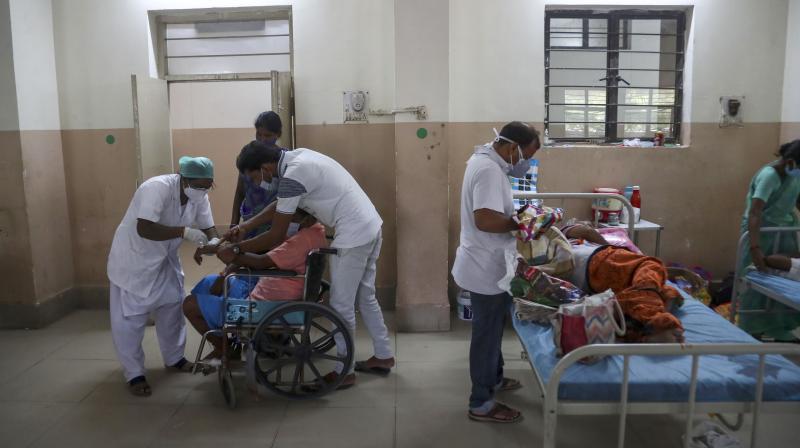 Health workers attend to patients infected with black fungus at the Mucormycosis ward of a government hospital in Hyderabad, May 23, 2021. (AP /Mahesh Kumar A.)

New Delhi: In view of the rising Mucormycosis (commonly known as black fungus) cases across the country, the Ministry of Chemicals and Fertilizers on Tuesday informed that it has allocated 19,420 additional vials of Amphotericin-B to various States and Union Territories.

"Additional 19,420 vials of #Amphotericin-B have been allocated to all States/UTs and Central Institutions today. Besides this, 23680 vials of Amphotericin- B were allocated across country on 21st May", tweeted the Union Minister for Chemicals and Fertilizers, DV Sadananda Gowda.

Mucormycosis or black fungus is a fungal infection caused by exposure to mucor mould which is commonly found in soil, plants, manure, and decaying fruits and vegetables.

As of now, Amphotericin-B, an anti-fungal drug is being used for the treatment of the black fungus disease.

The Union Health Ministry, on May 20, urged the states to make mucormycosis, a notifiable disease under the Epidemic Diseases Act 1897. The central government has made it mandatory for states to report both suspected and confirmed cases of mucormycosis to the Integrated Disease Surveillance Programme (IDSP).

Cases of black fungus infection are being reported in several parts of the country. States like Rajasthan, Gujarat, Punjab, Haryana, Karnataka, Odisha, Telangana and Tamil Nadu have already declared it a 'notifiable' disease under the Epidemic Diseases Act, thereby making it mandatory to report every Mucormycosis case to the state government.