Surat Crime Branch ACP RR Sarvaiya has been tasked with investigating the case. 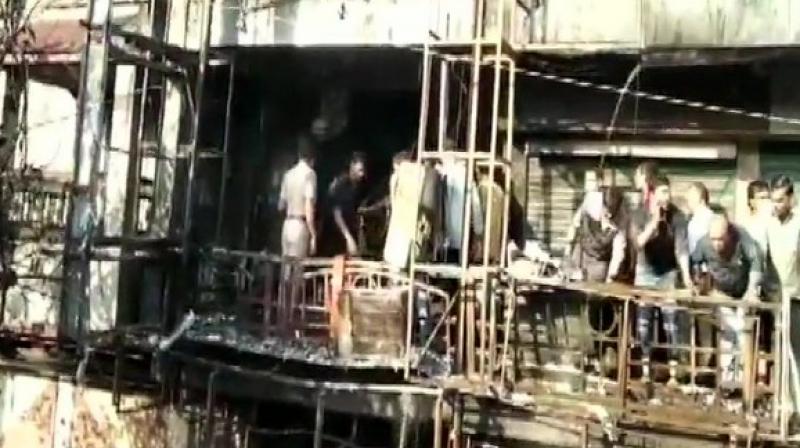 Several students were seen jumping off the building to escape the inferno. (Photo: ANI twitter)

Surat: One person was arrested and two fire officers of Surat were suspended on Saturday in the wake of the coaching centre blaze which claimed lives of 20 people, mostly students.

Hours after the incident, Bhargav Bhutani, the operator of the coaching centre located in Takshashila complex near Sarthana Jakat Naka in the city, was taken into custody even as police ordered shut down of all coaching centres in Surat until they got a safety certificate from the Fire Department.

Harshal Vekaria and Jignesh Padgal, builders of the complex, have also been booked under section 304 (culpable homicide not amounting to murder) and section 114 (abettor present when offence is committed) of the Indian Penal Code, Surat police said.

"We launched an operation to nab the accused soon after registering the FIR," Surat Police Commissioner Satish Sharma, who visited the site, said.

Surat Crime Branch ACP RR Sarvaiya has been tasked with investigating the case, he said.

"We have issued a notification under Section 144 of the CrPC to ban all the tuition classes with immediate effect. The ban has been imposed to ensure fire safety measures," he said, adding that the operators of tuition classes have been asked to get requisite fire safety checks done and install necessary equipment at their premises.

Gujarat Chief Minister Vijay Rupani has ordered an investigation and announced a compensation of Rs 4 lakh each to the families of those killed.

He said, "Twenty people have lost their lives in the tragedy in spite of our rescue efforts. Students, aged around 20 years, were trapped in the coaching centre when the fire broke out in the stairway."