India   All India  25 May 2019  Security lockdown, clashes in J&K after killing of Musa
India, All India

Security lockdown, clashes in J&K after killing of Musa 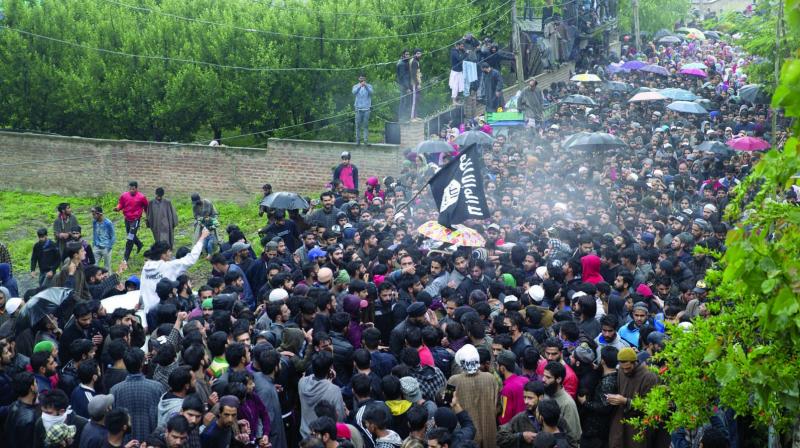 Srinagar: The J&K police and Central armed forces on Friday enforced a security lockdown in major parts of Kashmir amid heightened tensions and after nocturnal protests broke out in the restive Valley over the killing of “most wanted” militant commander Zakir Musa.

Zakir Rashid Bhat alias Zakir Musa, who headed the Al Qaeda’s India cell Ansar Gazwat-Ul-Hind, was killed in a gunfight that took place in Tral area in southern Pulw-ama district overnight. The house in which he had been holed up after the security forces launc-hed a cordon-and-search operation on Thursday evening suffered extensive damage during the fighting, the police and witnesses said.

While curfew or curfew-like restrictions are being enforced in Srinagar and some other major towns of the Valley, the authorities closed all educational institutions, suspended train services and snapped mobile Internet services across Kashmir. Officials said that schools and colleges will remain shut in the Valley also on Saturday “as a precautionary measure”.

Elsewhere in the Valley, a spontaneous shutdown brought life to a standstill on Friday. At places, irate crowds clashed with security forces. Witnesses said the security forces fired teargas canisters and pellet shotguns to quell protests and stone-pelting mobs in Srinagar and north-western town of Sopore, leaving several persons injured. A few security personnel were also hurt in stone-pelting. In Tral, thousands of mourners turned up at the funeral of Musa.

A report from eastern Doda district said that restrictions under Section 144 CrPc were imposed in two tehsils of Bhaderwah and Bhalla under the jurisdiction of police station Bhaderwah as a precautionary measure to prevent protests against the killing of Musa.

A police spokesman here said that Musa, who was earlier associated with Hizbul Mujahideen had “a long history of crime records since 2013”.

The spokesman said that he involved in planning and executing series of attacks against the security forces and also in many “civilian atrocities”.