PM Modi likely to take oath on May 30

Modi met President Ram Nath Kovind and tendered his resignation along with that of his Council of Ministers. 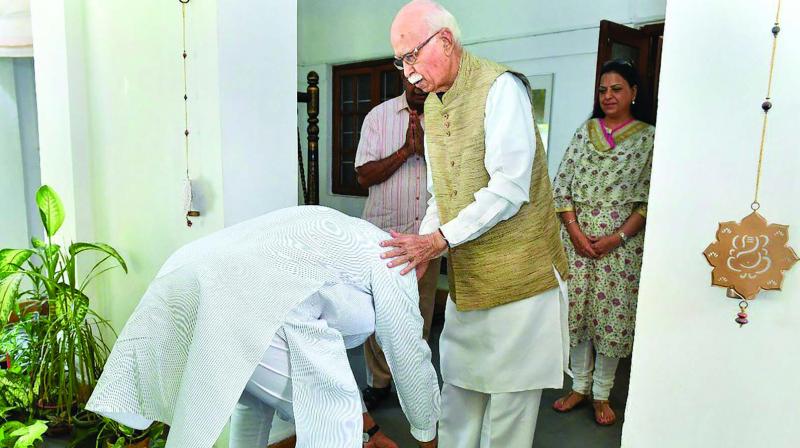 New Delhi: A day after the 2019 Lok Sabha verdict gave a second term to Prime Minister Narendra Modi-led NDA with a thumping majority, BJP sources indicated on Friday that the swearing-in ceremony of the new government could take place on May 30, giving Mr Modi enough time to visit his parliamentary constituency Varanasi on May 28 and seek his mother’s blessings in Gandhinagar the next day.

As celebrations in the saffron party continued, Mr Modi and BJP president Amit Shah on Friday called on party veterans L.K. Advani and Murli Manohar Joshi to seek their blessings.

The BJP, meanwhile, has called a meeting of its newly elected MPs on Saturday that is expected to be followed by a meeting of the NDA to formally elect Mr Modi as their leader, setting in motion the process of formation of the new government.

The BJP said the meeting will take place in Parliament’s Central Hall at 5 pm. Mr Modi is expected to address the MPs following his election as their leader. Prior to this, BJP MPs will meet separately at Parliament House. The NDA has won more than 350 members in Lok Sabha, including 303 of the BJP.

BJP circles were abuzz with speculation over the possibility of several new faces from states like West Bengal, Odisha and Telangana making it to the next Modi Cabinet. Many BJP leaders are of the view that Mr Shah may join the Modi Cabinet. He is likely to be considered for either of the four key ministries — home, finance, external affairs and defence.

With finance minister Arun Jaitley and external affairs minister Sushma Swaraj having health issues, there have been talks whether they will be part of the new dispensation or not. Defence minister Nirmala Sitharaman is expected to continue with a key role in the new government.

With Smriti Irani handing a shock defeat to Congress president Rahul Gandhi in Amethi, it is expected that the party may reward her with an important responsibility.

Earlier during the day, Mr Modi visited Mr Advani’s home and touched the feet of the party veteran before holding a brief interaction. Mr Advani had congratulated Mr Modi for his “unprecedented victory” and had hailed Mr Shah for an “enormous effort” in taking the party’s message to the voters.

Mr Modi later tweeted, “Called on respected Advani Ji. The BJP’s successes today are possible because greats like him spent decades building the party and providing a fresh ideological narrative to the people.”

After meeting Mr Advani, both Mr Shah and Mr Modi met Dr Joshi at the latter’s house. Dr Joshi greeted Mr Modi with a bouquet and presented him a stole.

In another tweet, Mr Modi said, “Dr Murli Manohar Joshi is a scholar and intellectual par excellence. His contribution towards improving Indian education is remarkable. He has always worked to strengthen the BJP and mentor several karyakartas, including me... Met him this morning and sought his blessings.”

Later talking to media, Dr Joshi said both Mr Modi and Mr Shah have done a great job and ensured a “magical victory” for the party.

Both Mr Advani and Dr Joshi, member of party’s “Margdarshak Mandal,” did not contest the just-concluded Lok Sabha polls because of the unofficial age bar of 75 years.

Earlier in the day, the outgoing Union Cabinet adopted a resolution recommending the dissolution of the 16th Lok Sabha.

The 17th Lok Sabha has to be constituted before June 3 and the process to form a new House will be initiated when the three Election Commissioners meet the President in the next few days to hand over the list of newly-elected members.

“The Prime Minister appreciated the efforts and dedication of the entire PMO, over the last five years, and urged everyone to rededicate themselves to work even harder to play a key role in fulfilling the hopes and aspirations of the people. He said people have great expectations from the government, and these expectations provide Team PMO with the energy to work to the utmost,” an official statement said.