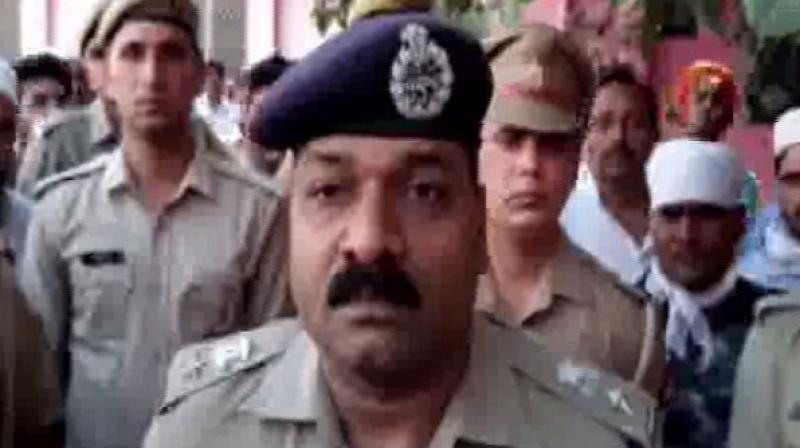 'It has been established that the children were shot dead and thrown in the tube well. SHO of Kotwali Nagar police station did not pay heed to the complaints of the deceased's families,' Bulandshahr SSP N Kolanchi told media persons here. (Photo: ANI)

Bulandshahr: Three minor children, including two girls and a boy, were found dead in a tubewell at Dhooturi village in Bulandshahr on Saturday morning, police said.

According to police, the prima facie revealed that the three children were shot dead last night and their bodies were later thrown into the tubewell. Cartridges and blood were also found near the tubewell.

"Three children went missing yesterday. It has been established that the children were shot dead and thrown in the tube well. The Station House Officer (SHO) of Kotwali Nagar police station did not pay heed to the complaints of the deceased's families," Bulandshahr SSP N Kolanchi told media persons here.

"One of the deceased's father, Hafiz Salim has cited family dispute for the triple murder. He has informed the police that his relative, Salman, was upset with them as he was not invited to the family's Iftaar party. In the past, he had given a warning to kill them. It has been learned that he owns a pistol. We have formed special teams to probe the matter," the SSP said.

The SSP has suspended SHO Munshi Ashok and inspector Dhuvar Bhushan Dubey of Kotwali Nagar for not taking immediate action in the case.

"A constable and the SHO have been suspended. Four teams are working on the case. Strictest action will be taken in the case," he told ANI.

The bodies have been sent for postmortem and further investigation is underway.