India   All India  25 May 2017  Uttar Pradesh: Muslims to participate in Yoga Day event
India, All India

On May 14, Union HM Rajnath Singh and UP CM Yogi Adityanath reviewed the preparations for the event, which will be held on June 21. 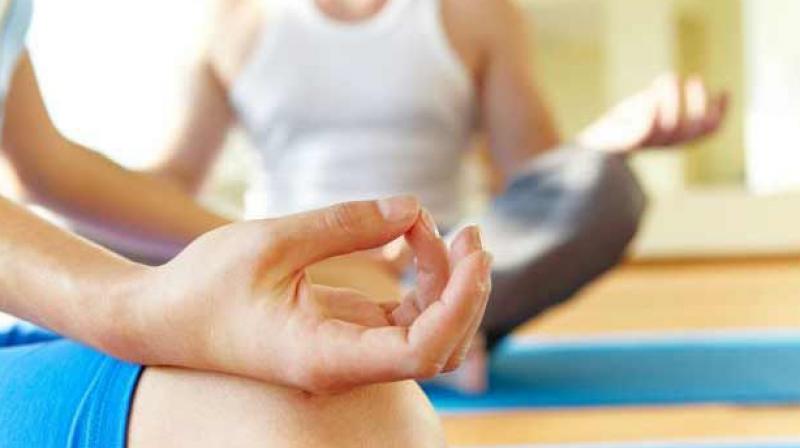 A 28-day workshop for the participants will be held prior to the International Yoga Day. (Representational Image)

Lucknow: The International Yoga Day event here on June 21 is likely to witness participation of Muslims in the presence of Prime Minister Narendra Modi.

"At least 300 Muslim men and women will participate in the International Yoga Day celebrations, which would be held in Lucknow's Ramabai Ambedkar Maidan. The number of participants may go up," Mahiraj Dhwaj Singh, national co-convener (organisation) of Muslim Rashtriya Manch for UP and Uttarakhand told PTI on Wednesday.

Spokesperson of All India Shia Personal Law Board Maulana Yasoob Abbas when contacted said, "We are open to the idea of participation in the International Yoga Day celebrations. We are exploiting all the options in this regard."

Syed Babar Ashraf, president of Sada-e-Sufiyaain Hind was of the view that if yoga is good for an individual's health, then it must be practiced.

"We are all for yoga and will participate in the International Yoga Day festivities. Problem arises when religion is mixed with yoga. As far as we are concerned, there is no problem with yoga," he said.

On May 14, Union Home Minister Rajnath Singh and Uttar Pradesh Chief Minister Yogi Adityanath reviewed the preparations for the event, which will be held on June 21.

Prime Minister Modi along with 55,000 people are likely to participate in the event.

A UP government spokesperson on Wednesday said that Rajnath Singh met Adityanath to discuss and review the preparations of the International Yoga Day. Union Ayush minister Shripad Yesso Naik was present at the meeting.

Adityanath said that for convenience of ordinary citizens, LED screens will be installed at different parks in the city, so that they could also participate simultaneously.

He also issued directions to hold a 28-day workshop for the participants prior to the International Yoga Day.

The Union Ayush Ministry had proposed Lucknow as the venue for the main function for IDY celebrations this year.

Earlier, the government was considering Bhopal, Jaipur, Ahmedabad, Ranchi and Bengaluru as possible venues for the event.

The Union Ayush Ministry is also planning to organise a major yoga event in at least one city in each of the districts across the country.

The ministry zeroed in on Lucknow as the possible venue at a review meeting for the June 21 event.

The official website of the Ayush ministry on its webpage pertaining to IDY also requests the people visiting the page to make the following pledge -- "I pledge to make Yoga an integral part of my daily life."

So far, 30.46 lakh visitors have pledged to make Yoga an integral part of their daily life.

The first IDY celebration was organised at Rajpath in New Delhi on June 21, 2015 in which representatives of 191 countries had participated. Last year, the main function took place in Chandigarh.

The United Nations General Assembly, heeding to a call by Prime Minister Modi, had made a declaration in December 2014 to observe June 21 as IDY every year.